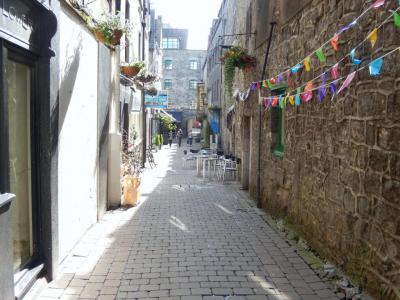 Cobblestoned medieval Kirwans lane is lined with 16th and 17th century houses. It is named for the Kirwan family, one of the "tribes" that ruled Galway for centuries. Kirwan's Lane was originally within the city walls. The Lane is very narrow. It connects with a right angle Quay Street and Upper Cross Street.

The Lane is thought to be one of the five remaining medieval lanes in the city. There were once 14 such lanes. In 1783, Dick Martin, whose wife, a Kirwan, was an actress, opened a 100 seat theater on the lane. Several famous actors played there, among them, the Irish patriot Theobald Wolfe Tone.