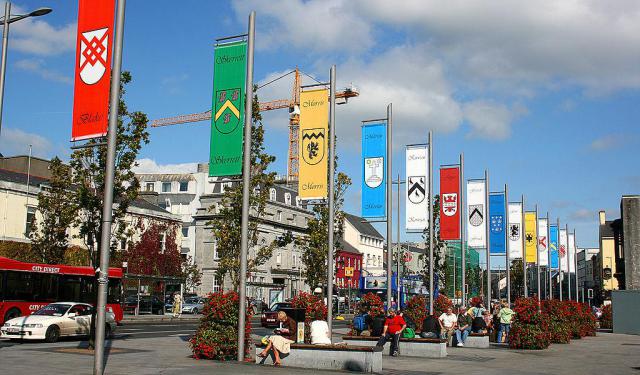 Image by Eoin Gardiner on Wikimedia under Creative Commons License.

Also known as Gaillimh, which means "stony", Galway is one of Ireland's fastest developing cities. Despite 800 years of history, Galway has retained much of its medieval atmosphere. Its other nickname, the "City of the Tribes", is due to the fact that Galway was established by 14 families or tribes. Symbols of each of these tribes today can be found in Eyre Square, and the residence of one of them – the Lynch Castle – is still in place, too. Among the city's most prominent visitors over the centuries have been the likes of Christopher Columbus and John F. Kennedy. Take this orientation walk and see the most notable sights of Galway.
How it works: Download the app "GPSmyCity: Walks in 1K+ Cities" from iTunes App Store or Google Play to your mobile phone or tablet. The app turns your mobile device into a personal tour guide and its built-in GPS navigation functions guide you from one tour stop to next. The app works offline, so no data plan is needed when traveling abroad.

John F. Kennedy Memorial Park is an inner-city public park in Galway, Ireland, formerly officially named Eyre Square and still widely known by that name. The park is within the city centre, adjoining the nearby shopping area of Williams Street and Shop Street. The park is rectangular, surrounded on three sides by streets that form the major traffic arteries into Galway city centre; the West side of the Square was pedestrianised in 2006.

The origin of the square comes from medieval open space in front of town gate, known as The Green. Mostly markets took place in northern part of the space. The earliest endeavour to glamourize it were recorded in 1631. Some ash-trees were planted and park was enclosed by wooden fence. The plot of land that became Eyre Square was officially presented to the city in 1710 by Mayor Edward Eyre, from whom it took its name. In 1801 General Meyrick raised stone wall around the square, which was later known as Meyrick Square. In the middle of the 19th century the whole park underwent a redevelopment in Georgian style. In the 1960s full-scale reconstruction started and iron railings were removed and raised around the backyard of St. Nicholas' Church, and in 1965 the park reopened with a new name.

Image by Boocal on Flickr under Creative Commons License.
Sight description based on wikipedia
2

The Hotel Meyrick is the oldest hotel in the city. It was first opened its doors to guests in 1852, it was then known as the Railway Hotel. It was completed at a cost of £30,000 for the Midland Great Western Railway Company. The company's architect, John Skipton Mulvany, designed both the Galway railway station and hotel. Just over the entrance on the façade of the hotel carries Mulvany’s favourite motif, the wreaths.

The builder was William Dargan and it is built of limestone ashlar with a cornice over the heavily rusticated ground floor. The only other building in Galway using this limestone is Galway Cathedral. The ground floor also has recessed and architrave windows and a heavy string course. The original façade was topped by a shelf like Doric cornice. Among the surviving internal features in the hotel is a fine marble fireplace incorporating a pair of bronze discs, emblazoned with the Midland and Great Western Railway arms and is dated 1845.

Image by Sanford Pelz under Creative Commons License.
Sight description based on wikipedia
3

The Spanish Arch was originally an extension of the city wall from Martin's Tower to the bank of the Corrib, as a measure to protect the city's quays, which were located in the area once known as the Fish Market (now Spanish Parade). It was constructed during the mayoralty of Wylliam Martin in 1584, being called ceann an bhalla (the head of the wall). In the 18th century the Eyre family of Eyrecourt, County Galway, created an extension of the quays called The Long Walk and created the arches to allow access from the town to the new quays.

The Spanish Arch is located on the banks of the River Corrib directly across from The Claddagh. Ballyknow Quay, Claddagh, Galway, with The Long Walk in the background. In 1755, the arches were partially destroyed by the tsunami generated by the 1755 Lisbon earthquake. Until 2006, part of the Arch housed the Galway City Museum. At that time, the museum was moved to a new, dedicated building located just behind the Arch. The Long Walk is a promenade to one side of the Arches.

Image by Mad-Lunatic on Flickr under Creative Commons License.
Sight description based on wikipedia
4

Located near the famous Spanish Arch, the main museum of Galway was founded in July 2006. The museum is here to tell the story of the city and its surroundings. It overlooks the River Corrib and the old villages here. The Galway City Museum houses objects dating from medieval times up to the present.

O'Briens Bridge was built in 1506 by Turlough O'Brien, First Earl of Thomond and his brother, the Bishop of Killaloe. This 16th-century bridge was replaced or rebuilt in around 1750. Five of the arches on the western side of the bridge date from this period. Six arches on the eastern side were replaced by the Shannon Commissioners in 1842. The first arch on the western side was replaced by the present navigation arch when the Shannon Scheme was built downstream in 1925-29. At the eastern end of today's 12-arch bridge lies the village of Montpelier in County Limerick.
Image by keepwaddling1 on Flickr under Creative Commons License.
Sight description based on wikipedia
6

The Latin Quarter – often referred to as the cultural heart of Galway – is home to many of the city’s quirkiest and best-known shops, pubs, restaurants and hotels, along with historic landmarks, events and attractions. It’s always a popular destination for local Galwegians and visitors to the city alike to socialise, boasting extensive pedestrianised cobblestoned streets that offer a unique festive-like atmosphere regularly lined with street performers and entertainers. It is defined by some of the city’s most historic landmarks and stretches from the Spanish Arch at Long Walk to O’Brien’s Bridge to St Nicholas’ Church and back (via Buttermilk Lane) to An Taibhdhearc on Middle Street, and provides the heartbeat to the City of the Tribes.
Image by Karen in California on Flickr under Creative Commons License.
7

This is the largest medieval church in the country. It dates back to 1320 and was built to worship Saint Nicholas of Myra who is the patron saint of sailors. It is believed that the church was visited in 1477 by Christopher Columbus. In the past, the elections for the mayor were held within its walls.
Image by Mark Grealish on Flickr under Creative Commons License.
8

According to one of the local legends, this is the window where the son of James Lynch FitzStephen was hanged. After he found his son guilty of killing a Spanish sailor, he himself hanged him, and the memorial is a tribute to the legend.
Image by amerune on Flickr under Creative Commons License.
9

This was once the house of the most powerful family in the city. It was designed in the Irish Gothic style and beautifully executed in limestone. Many Galway mayors were elected from the Lynch family. It is believed that the castle was built in the period between 1484 and 1509, during the reign of King Henry VII, and this is visible on the building..
Image by LiamDC on Flickr under Creative Commons License.
10

The original sculpture of the two writers was made in 1999 by Tiiu Kirsipuu. The actual conversation which is the subject of the sculpture has never really taken place. The Galway statue is a gift from the Estonian city of Tartu.
Image by Sebb on Wikimedia under Creative Commons License.
11

The Galway Courthouse was erected in 1812 but it took three years for it to start its activity. In 1830 alone, 200 death sentences were handed out, but some of them were never carried out. This impressive building is a heritage landmark in Galway.
Image by John Lord on Flickr under Creative Commons License.
12

Built in the 1820s, this exquisite architectural work of art served first as a Courthouse and then was converted into the Town Hall, and later into a cinema. Nowadays it serves as a popular theater.
Image by Loren Javier on Flickr under Creative Commons License.
13

The first stone of this bridge was laid on 29th June, 1818. This is the largest weir in the country and it covers a distance of more than two hundred yards.
Image by RowanTownsend on Flickr under Creative Commons License.
14

The Cathedral of Our Lady Assumed into Heaven and St Nicholas, commonly known as Galway Cathedral, is a Roman Catholic cathedral and the largest and most impressive buildings in the city. Construction began in 1958 on the site of the old city jail, and in 1965 was finally dedicated by Cardinal Richard Cushing to Our Lady Assumed into Heaven and St Nicholas. The architecture of the Cathedral draws on many influences. The dome and pillars reflect a Renaissance style. Other features, including the rose windows and mosaics, echo the broad tradition of Christian art. The Cathedral dome, at a height of 44.2 metres, is a prominent landmark on the city skyline.
Image by emarocca on Flickr under Creative Commons License.
Sight description based on wikipedia
15

Galway Arts Centre is an art gallery open from Monday – Saturday and admission here is free. More than an art exhibitions center, Galway Arts Centre offers classes in art and also in writing and photography and other forms of art. Its mission is to promote art among young people, to encourage new artists, and present Galway to tourists.
Image by Johannes Ghee on Flickr under Creative Commons License.
16

This is the place to get a wonderful view of the city, the ocean, and the port houses of the Claddagh. Many locals come here to feed the swans or just to take a walk. The port plays a major role in the life of Galway's citizens as it gives them access to the Atlantic Ocean, facilitates commerce and is the everyday workplace of many fishermen. Here you can see their "simple life" and the link between man and nature.
Image by yisris on Flickr under Creative Commons License.

Galway is not only pubs and beer, the city has also many other things to attract you. The area around Galway is well-known for the hand-knit Aran sweaters that are a legacy of an old tradition. Some other cottage industry specialties here are: tweeds, jewelry, woolens, crystal and pottery. The Claddagh Ring even became a symbol of Ireland. Take a tour of the local specialty shops where you will...  view more

Drink a fine Irish beer and meet new people, relax and enjoy the atmosphere of a classic Irish Pub. The pubs of Galway preserve the tradition and are a great place to go to when in the city. Do not miss the chance to take a tour of some original Irish Pubs.

One of the most beautiful panoramas in Galway, breathtaking Irish landscapes, miles of white sand beaches: Salthill is all this and more. If you want to enjoy a horse ride on the beach, play golf, dive into the ocean, take your best photographs, take this tour for a perfect day of recreation on the shores of Ireland.

Get to see Ireland from inside. Relax in a traditional Irish atmosphere and enjoy Irish music. And most of all, there is always a Guinness beer nearby. Feel the Irish spirit and spend a great and unforgettable day.