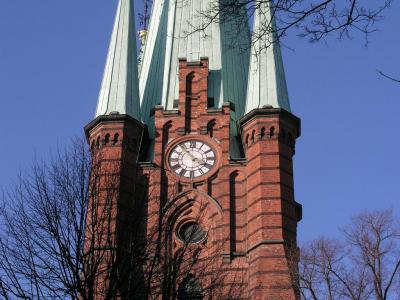 The Church of Saint Clare or Klara Church (Klara kyrka) was founded on the site of today's Klara Västra Kyrkogata in the Klara area in lower Norrmalm in the 1280s. Initially, it was part of the Roman Catholic Convent whose inhabitants were members of the order of Saint Clare, hence the name of the church and the entire neighborhood, Klarakvarteren. Eventually, this name has become synonymous with the old city that once occupied lower Norrmalm.

For 300 years until the 15th century, the convent had enjoyed great prosperity. Then the number of new nuns began to decline, incomes dwindled and the armed conflicts hit the nunnery so that it physically fell into disrepair. In 1527, both the church and the convent, by that time already a ruin, were torn down upon the commencement of the Protestant Reformation by Gustav Vasa, the then King of Sweden. Construction of the current church commenced in 1572 under Johan III.

The new church was severely destroyed by fire in the mid-18th century. It was rebuilt, but during the 19th century endured several major renovations and its interior got an entirely new look. The latter now contains many paintings emblazoned with golden tones and warm hues, along with the stylish stained glass highlights reminiscent of the 18th century, and a pulpit of gold that is a sight to behold.

The exterior we see today, in many ways, is a 19th century creation. The 116-meter (381 ft) tall tower was built as part of the restoration work in the 1880s. As for the church graveyard, it was started in the 17th century. Among its famous residents is the poet, Carl Michael Bellman. Presently, the church is completely surrounded with modern buildings, and can only hint at its presence to the onlooker with the spires peeking above.