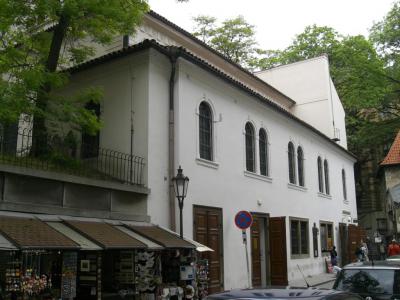 The Klausen Synagogue, found near the entrance of the Jewish Cemetery in the Jewish Quarter, is particularly worth visiting for its permanent exhibitions.

The synagogue was commissioned by Mordechai Maisel, a rich philanthropist, in honour of Emperor Ferdinand III who visited the area in 1573. Originally, it consisted of three buildings and was named “Klausen”, which is the plural form of “Klaus” and means “small buildings”. One of the building was used for religious ceremonies, the other one was a Talmud School where Rabbi Lowe (of the Golem of Prague fame) taught, and the third housed the ritual baths.

The original Klausen was destroyed in the Great Fire of 1689 and rebuilt as synagogue in 1704. It was the largest place of worship in the Jewish Quarter and the seat of the Prague Burial Society.

Today, the synagogue holds a permanent exhibition in its central nave, dedicated to Jewish Customs and Traditions. Here you will learn about the customs related to various events, from birth to death, including circumcision, weddings and divorce. There are also Hebrew prints and manuscripts on display complete with the touching drawings by children from the Terezin ghetto, as well as a fine collection of Hanukkah candelabras and Esther Scrolls.
Image by Chmee2 on Wikimedia under Creative Commons License.