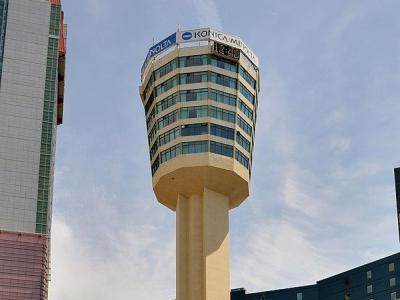 Located on the 25th floor, the observation deck features a panoramic view of the falls and Niagara River in addition to floor-to-ceiling windows treated with a non-glare finish designed to enhance photography. There are many historical photos and news articles about the construction of the tower mounted around the deck in addition to pay-per-use telescopes. The observation deck is now closed and only available for weddings. Renovated in March 2005, the tower's restaurant offers gourmet meals featuring steak and seafood. At the same elevation as the Observation Deck, the restaurant is open for three meals per day.
Image by John Vetterli on Flickr under Creative Commons License.
Sight description based on wikipedia

Want to visit this sight? Check out these Self-Guided Walking Tours in Niagara Falls. Alternatively, you can download the mobile app "GPSmyCity: Walks in 1K+ Cities" from iTunes App Store or Google Play. The app turns your mobile device to a personal tour guide and it works offline, so no data plan is needed when traveling abroad.

It is only natural that whoever visits Niagara Falls is eager to get the best possible view of the Falls itself. Luckily, there are quite a few spots in the city - such as Skylon Tower, Embassy Suite Hotel Tower, Konica Minolta Tower and Niagara Sky Wheel - offering exactly that. However, if the landmark waterfalls isn't just the only thing you want to observe in Niagara Falls, follow this...  view more