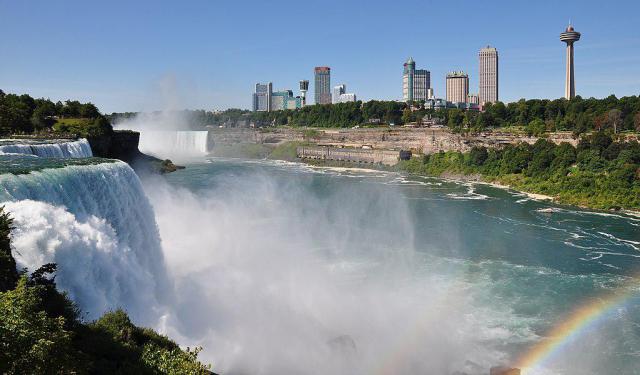 It is only natural that whoever visits Niagara Falls is eager to get the best possible view of the Falls itself. Luckily, there are quite a few spots in the city - such as Skylon Tower, Embassy Suite Hotel Tower, Konica Minolta Tower and Niagara Sky Wheel - offering exactly that. However, if the landmark waterfalls isn't just the only thing you want to observe in Niagara Falls, follow this orientation walk and find out what else is there worth checking out.
Image Courtesy of N.H. Fischer.
How it works: Download the app "GPSmyCity: Walks in 1K+ Cities" from iTunes App Store or Google Play to your mobile phone or tablet. The app turns your mobile device into a personal tour guide and its built-in GPS navigation functions guide you from one tour stop to next. The app works offline, so no data plan is needed when traveling abroad.

1) Birds of the Lost Kingdom (must see)

Located close to the Falls on River Road, Bird Kingdom is one of the most visited attractions in Niagara Falls. It houses a very large live exhibition of birds from 80 different world species, many of them scarcely found in their natural habitat. Niagara Falls Bird Aviary is open to visitors daily from 9:30 am to 7 pm.
Image Courtesy of Wikimedia and Dennis Jarvis.
2

Open since 1999, Planet Hollywood is one of the most prominent Niagara Falls attractions. Its round roof, unusual architecture, and original movie cars imitating a queue in front of the restaurant exemplify Hollywood influence. The walls of the inside dining rooms are full of souvenirs that were gifted to the restaurant by Hollywood celebrities.
Image Courtesy of Flickr and Shazron.
3

Fallsview Indoor Waterpark officially opened on May 2006. More than 200,000 US gallons (760,000 l) of water are used to operate this facility. There is a water oasis spanning 125,000 square feet (2.9 acres) that features high-speed water slides among other water-related attractions. An interactive Atlantis-themed aquatic play area, along with an indoor wave pool and six swimming pools including multiple activity areas for water-related sports can be found on the premises. There is also an outdoor activity pool open year round.

Other attractions include a jungle-style beach for children to play in, a beach club-style restaurant and a bar. This waterpark has been consistently compared to similar waterparks in Ohio and Indiana and was judged to be superior. The waterpark has managed to enjoy its reputation as one of the cleanest and most spacious waterpark in North America.

Located near Clifton Hill, people of all ages can dry off and enjoy the land-based museums and attractions that can be accessed within walking distance of the waterpark.

Image Courtesy of Wikimedia and Michael Gray.
Sight description based on Wikipedia.
4

4) Movieland Wax Museum of the Stars (must see)

Located at the bottom of Clifton Hill next to the Great Canadian Midway in Niagara Falls, Movieland Wax Museum holds more than 75 life-sized wax figures of stars from classic to current movies as well as music and recording stars. They are depicted in the most famous acting scenes. The museum allows visitors to take pictures with the Hollywood celebrities, a great popular attraction for tourists.
Image Courtesy of Flickr and HelveticaFanatic.
5

One of the three arcades on Clifton Hill, the Great Canadian Midway, is an all-age game area. Besides being a clean place, they offer an amiable service for hundreds of fun, interactive games. Tickets may be exchanged for great prizes. Great Canadian Midway is considered to be one of the best places for family entertainment in Niagara Falls.
Image Courtesy of Flickr and John Vetterli.
6

6) Ripley's Believe It or Not Museum (must see)

Situated on Clifton Hill since 1963, Ripley's Believe It Or Not Museum still upholds its reputation of being the best museum in Niagara Falls. With its strange and incredible customs, artifacts and diverse hobbies, the museum houses Robert Ripley's exclusive collection of world curiosities. It features more than 700 exhibited items. Ripley's Believe It Or Not Museum is worth visiting by all-aged guests.
Image Courtesy of Wikimedia and RipleysOnline.
7

Ripley's 4D Moving Theater is next to the House of Frankenstein on Clifton Hill. They display two adventures daily. Strap yourself in hydraulic chairs moving in different directions and watch the movies through special glasses. It will make your experience very real. The attraction is not advisable for pregnant women or people who have health problems.
Image Courtesy of Flickr and dbking.
8

Tussaud's Louis Waxworks can be found right near the Casino Niagara on Victoria Ave. The museum presents a wonderful collection of easily recognizable wax figures. There are over 100 lifelike wax replicas of world celebrities housed under the roof of an impressive English Tudor style construction. An interactive wax museum in Niagara Falls, the attraction is worth being toured by everyone from kids to grown-ups.
Image Courtesy of Flickr and Eden, Janine and Jim.
9

Its 42 Swiss-manufactured fully enclosed passenger cars are heated in the winter and air conditioned in the warmer months and each can carry eight people. The ride is approximately 12 to 15 minutes long, giving passengers views of the Niagara River, and the Horseshoe Falls and American Falls.

Image Courtesy of Flickr and Kulveer Virk.
Sight description based on Wikipedia.
10

The Skylon Tower is seen in Superman II. It is also used as a police lookout in the 1979 film Search and Destroy starring Perry King and George Kennedy.
Image Courtesy of Flickr and dancingnomad3.
Sight description based on Wikipedia.
11

In operation at Niagara River over the past 230 years and newly reconstructed and modernized in 1966, the Falls Incline Railway, a.k.a. Horseshoe Falls Incline, assures a comfortable railway link between Falseview resort area and Niagara parks. The short transportation will lead you to the Table Rock Welcome Centre at the falls. The historic house, built in 1853, features a dining restaurant, an organized journey behind the falls, an operating centre and some gift stores. The observation deck in front of the Table Rock House offers an amazing and most popular open-air panorama of the falls.
Image Courtesy of Wikimedia and Niagara.
12

12) The Embassy Suites by Hilton

Situated right in the centre of the Fallsview tourist area, the Hilton Embassy Suites is a hotel giant featuring 42 levels above the falls. It is the tallest and largest Embassy Suites of all the other 190 hotels of the brand, across the USA and Canada. The tower is one of the most eye-catching landmarks in Niagara Falls, its architecture having been inspired from the location itself. Its visitors are offered a wonderful view of the nearest local attractions as well as a breathtaking scene of the falls.
Image Courtesy of Flickr and Gary Paakkonen.
13

Located on the 25th floor, the observation deck features a panoramic view of the falls and Niagara River in addition to floor-to-ceiling windows treated with a non-glare finish designed to enhance photography. There are many historical photos and news articles about the construction of the tower mounted around the deck in addition to pay-per-use telescopes. The observation deck is now closed and only available for weddings. Renovated in March 2005, the tower's restaurant offers gourmet meals featuring steak and seafood. At the same elevation as the Observation Deck, the restaurant is open for three meals per day.
Image Courtesy of Wikimedia and Taxiarchos228.
Sight description based on Wikipedia.