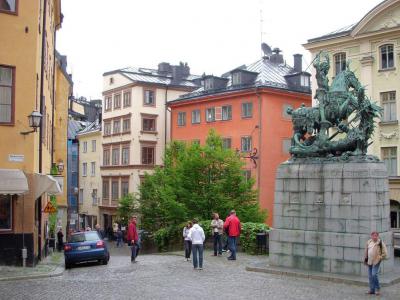 Köpmanbrinken ("Merchant's Slope") is a historic street composed of two slopes. The northern slope has been commonly referred to as Fiskestrandsbrinken ("Fishing Shore Slope"). Back in the Middle Ages, up until 1520, the area east of the slopes, between the alleys Nygränd and Brunnsgränd, used to be the major fish market, Fiskaretorget. Since the foundation of Stockholm, the slopes have reflected the original inclination treadled by the city's first inhabitants.

Walking along the street, visitors will find some of the most famous icons, like the replicated statue of Saint George and the Dragon, the medieval original of which is found at the Storkyrkan Cathedral. This bronze replica was cast in 1912 by Otto Meyer. Saint George is depicted as a young man in his battle armor with the lance impaling the dragon. In contrast to the Storkyrkan original, several parts of the statue have been altered, like the knight's helmet and the dragon positioned differently. Saint George sits atop a life-sized horse with the dragon’s legs pushing into the horse’s stomach. The plinth is embellished with reliefs of the martyrdom of the brave saint. The original piece was commissioned by the Swedish Viceroy, Sten Sture, in 1489.

Back in the day, on the narrow space along the slopes' eastern sides, where the Saint George statue is found today, there was an entire block, called Acteon, which collapsed in 1829. Following the collapse, the slopes were made less steep and, during the 19th century, were regarded as two individual streets, separated by Köpmantorget square. The two streets were subsequently united into one, with its present name, in 1885.
Image by Holger.Ellgaard on Wikimedia under Creative Commons License.
Sight description based on wikipedia