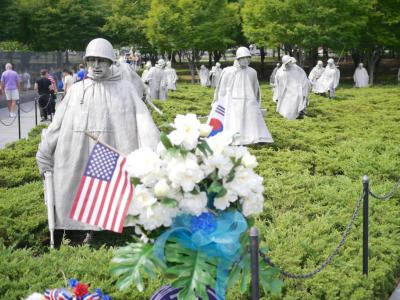 The Korean War Veterans Memorial is located in West Potomac Park in Washington, D.C. The memorial is to honor all those who served in the Korean conflict. The United States came to the aid of South Korea after it was invaded by North Korea at the request of the United Nations. The U.S. was divided about the war, and in fact, called it a conflict rather than a war. The Korean War was a hard-fought battle in brutal conditions. During the Chosin Reservoir battle, the temperature plummeted to -40F.

The memorial is built in the shape of a triangle with juniper and strips of concrete simulating the rough terrain of the battle. The triangular shape represents the Field of Service. Interspersed among the juniper and concrete are 19 statues of soldiers. The soldiers are dressed in military clothing which is windblown, recalling the harsh weather conditions. The statues are made of stainless steel. Along the south side of the memorial is a black granite wall which reflects the statues, so that it looks like there are 38 soldiers in total, a nod to the 38th parallel that separates North Korea from South Korea.

The Field of Service ends in a triangular reflecting pool. Along the north side is a low wall made of granite. The names of the 22 U.N. countries that participated in the Korean War are engraved here. The memorial may be visited 24 hours a day; park rangers are available from 8am to 12am every day except major holidays.

Why You Should Visit:
The company of soldiers depicted as moving through hostile terrain is a bit eerie and very lifelike, making this one of the most remarkable war memorials you'll ever see.

Tip:
Truly better to visit after dark; the lighting is so very dramatic, you can almost hear the soldiers' boots sloshing through the mud.
Additionally, use your phone flashlight to look carefully at the black wall that has images of soldiers laser-etched onto the black surface.
Image Courtesy of Flickr and Kārlis Dambrāns.
Sight description based on Wikipedia.