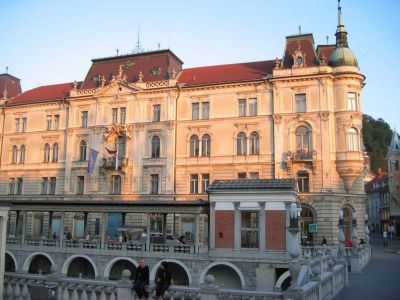 The Kresija Palace (Slovene: Kresijska Palaca) is found in the central part of Ljubljana, on the bank of the Ljubljanica River near the Triple Bridge. Noted for its blend of Neo-Baroque and Neo-Rococo styles, the building was completed after the Ljubljana earthquake of 1895 to house the Ljubljana district bureaucracy of the then Duchy of Carniola. The name of the palace derives from the old Slovenian word "kresija", used as a common colloquial name for the Austrian districts, known as Kreise in German ("okraji" in standard Slovene). It was commissioned by Mayor Ivan Hribar as part of the larger plan of urban renovation of Ljubljana.
Image Courtesy of Wikimedia and Ziga.
Sight description based on Wikipedia.