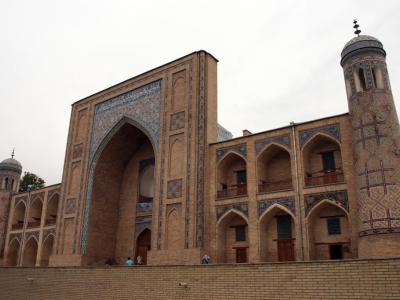 The ancient Kukeldash madrasah (Islamic religious school) is the largest of the 23 madrasahs found in Tashkent. It is also one of the oldest in Central Asia, built circa 1570, under the Shaybani Dynasty. Back then, the area was the southern edge of the city, and the madrasah was set upon the remains of the rampart of the southern fortress with a moat (which is now a street).

Historically, the establishment of the school has been attributed to two famous individuals of that period, namely: Qulbobo Kokaldosh, the influential minister of the Sheybanid sultan Barak Khan, and the governor of Tashkent, Darvesh Khan, nicknamed "kukeldash", which means blood brother of the khan. The opinions, as to who exactly founded and built the school, vary.

The two-story yellow brick building is of traditional square shape, with a huge gate and inner yard. The actual walls surrounding the inner yard are the living quarters for students – two-story dormitories in the form of cells (“hujras”).

By the 1730s, the structure had fallen into disrepair and was converted to caravanserai, a roadside inn for caravaners. Following that, for a while, it served as a fortress. In 1830-1831, the first floor of the building was demolished, and the bricks were used to build the nearby Beklarbegi madrasah. It was later restored.

Several earthquakes, in 1868 and 1886, destroyed the façade, which was subsequently restored in 1902-1903. The building was reconstructed again, in the 1950s, following yet another devastating earthquake, in 1946, and was one of only few religious sites in Tashkent to survive the most recent, 1966 earthquake.

Throughout the 20th century, the building served as a museum, first of atheism, and later of folk music. In the 1990s it was made a madrasah again. As a result of numerous reconstructions, the appearance of the madrasah has changed. Despite that, it still remains a must-see attraction in Tashkent, known for its landmark gate, 20 meters (66 feet) high, flanked by two towers.

In 2008, on the occasion of the 2200th anniversary of Tashkent, the frontal part of Kukeldash received a fresh “facelift”.
Image Courtesy of Wikimedia and Digr.