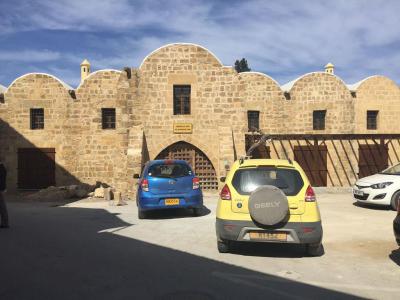 After a hard scrub with black soap and a hammering massage at one's favorite Hamam, check in at the old Gambler's Inn. The Gambler's Inn is a roadside inn, maybe built in the 17th century. Located in North Nicosia, it is one of the many roadside inns scattered throughout the old Islamic world. It was originally called as the Violinist's or Fiddler's Inn. It's not known when, or why, the name changed, or if gambling ever occurred at this place.

The inn is smaller than Great Inn (Buyuk Han), Nicosia's other roadside inn. After passing through the main entrance, one encounters an open courtyard. The courtyard is surrounded by the two-story inn. Originally, the inn had 56 rooms. The upper story was for travelers. The lower story was used for animals and storage. As of 2008 the inn was dilapidated.

Rejoice. As of 2018, the inn was restored and usable. It serves, as of today, as a cafe/restaurant. There are also shops for local artifacts in the rooms once used for storage. In 1936, Rupert Gunnis, patron of the Cyprus Museum, called Kumarcilar Han the "Kahn of Itinerant Musicians." What groups played there is not known.
Image Courtesy of Wikimedia and Seksen iki yüz kırk beş.