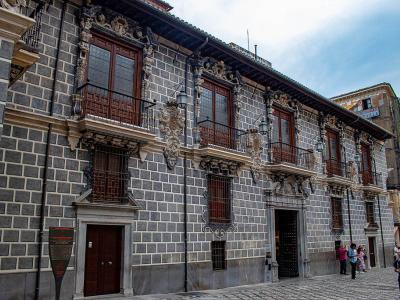 On the Oficios Street, between the Granada Cathedral and the Alcaiceria, where gold, and silk were traded long ago, sits the Madrasa of Granada. Founded in 1349 by Yusuf I, Nasrid Emir of Granada, the Madrasa was a school of Islamic law and grammar. The syllabus also included Rhetoric and Medicine.

The Madrasa survived when the city was ceded to Ferdinand and Isabella. Then in 1500, after a Muslim rebellion, Gonzalo Jimenez de Cisneros, Inquisitor-General, attacked the Madrasa. The building was sacked, the irreplaceable library books were burned in the Plaza Bib-Rambla. No one was ready for the Spanish Inquisition.

Subsequently, the building was variously standing empty, used as a city hall, or taken over to serve as a textile warehouse, its noble purpose long forgotten. In 1860 The Mihrab inscription dedicating the mosque to the month of Muharram was found. After several restorations, the Madrasa was opened to the public in 2011.

The sole part of the original Madrasa surviving today is the Prayer Room. It has a high ceiling. Halfway up the walls the shape of the room changes to an octagonal form. The upper walls are covered with stucco decorations and calligraphy. There are 16 windows and a wooden cupola overhead.

Within the entrance an inscription reads, "If in your spirit you provide a place for the desire to study...you will find within it the beautiful tree of honor..." The Inquisition tried to erase this place, and it failed.
Image by Rumomo on Wikimedia under Creative Commons License.