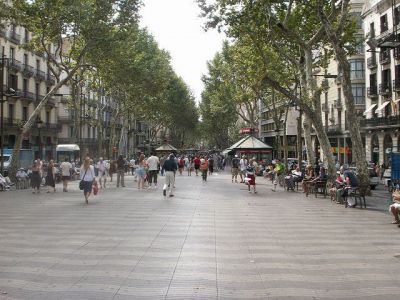 La Rambla is Barcelona's main thoroughfare packed with colorful shops, cafes, restaurants and just as colorful leisurely crowd. It is by far more than just a street but a live manifestation of Barcelona's adventurous and independent spirit. The street runs for 1.2 kilometers from the Christopher Columbus Monument at Port Vell to Plaça de Catalunya in the center of the city, and is particularly dense at the height of a tourist season. The pavement cafes and souvenir kiosks, lining the street, attract numerous city guests much as the local pickpockets, beware, so it's always good to keep one's eyes open, just to be on the safe side.

The prices here are a bit steeper than elsewhere in the city, but then again, excitement does come at a price, you know, and La Rambla sure gives tonnes of it. One of Spain's greatest poets, Federico García Lorca, once said of La Rambla that it's "the only street in the world which I wish would never end." Ahh...

Tip:
You have to walk on Las Rambla to get to the famous La Boqueria market, which has tons of places to eat and many great options. However, if you want excellent food at half the price and to be able to actually sit and enjoy your meal, go to Mercado de Santa Caterina, which is a 10min walk from La Boqueria.
Image Courtesy of Flickr and Rainer Ebert.