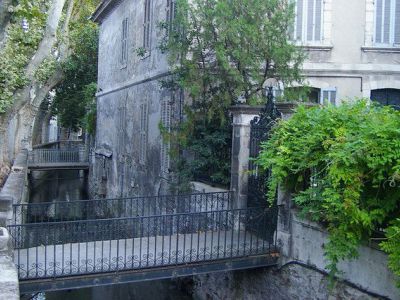 Down by the River Sorgue there is a canal, the Vaucluse channel. The channel leads water from the river through the city walls to the street of the Dyers of Avignon. From the 14th to the 19th century this street was a very busy place. There was intense textile manufacturing activity.

Twenty-three water wheels provided the power to wash, rinse and dye silk and other fabrics. The street gained the sobriquet "Street of the Wheels." Today there are only four wheels left and they are not operating.

On the the eastern end of the street of the Dyers there is the very strange Maison du IV de Chiffre ("House of digit four"). It is one Avignon's oldest remaining buildings made in the Gothic style. Built in 1493, it is noted for its crenelated cornice with two watchtowers and drainpipes in the shape of gargoyles.

The figure "IV" is carved into the facade between the ground floor windows. It has a heart impaled with a dart and the crosses of St Andrew and Lorraine. The meaning is a mystery although it is used on seals, playing cards and musical instruments. The building houses local associations and is sometimes used as a theatre.

On the same side of the street is Number 14, the house of Jean-Henri Fabre. Fabre was a naturalist whose work on insects inspired Darwin. At number 8 is the Chapel of the Grey Penitents. On the doorway is a painting of two hooded figures praying. The penitents were sincere. Nothing ominous is meant by the hooded robes.

The Grey Penitents were founded by King Louis VIII, who came to pray after the siege of Avignon. Number 8 is only open for religious services. Inside there is a 17th century paneled ceiling, a chapel in a hexagonal chamber and paintings by Pierre Parrocel and Nicolas Mignard.

Each year in November the members of the Grey order celebrate the parting of the Waters. These are not of the Red Sea, but of the ever rambunctious Rhone. On the 30th of November, 1433, the Rhone burst its banks but the waters parted in the nave of the church so the holy sacrament could stay high and dry.

Where the street crosses the rue des Lices, one comes upon the Convent of the Cordeliers, a 13th century Franciscan convent. Only a bell tower and a chapel are left. Laura de Noves, the unrequited love and muse of the poet Francesco Petrarch is supposed to be buried here.

Why you should visit
One may discover the secret of the house of IV or even the sting place of Laura Noves.

Tips
Take enough time to follow the entire street, if possible. There's a lot here.
Image Courtesy of Flickr and YuriBCN aka JordiVK.