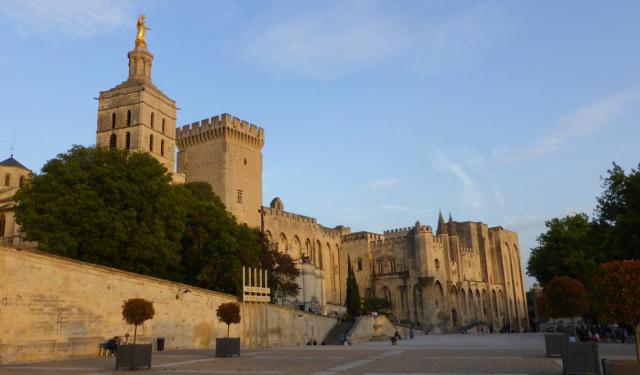 Image by Henk Monster on Wikimedia under Creative Commons License.

Avignon maintains its centuries of history with some of France’s best historic architecture. It contains a wide range of old buildings, such as Palais du Roure, Opéra Théâtre, the famous city walls and more. Check out the most fascinating architecture of historic Avignon in the following tour.
How it works: Download the app "GPSmyCity: Walks in 1K+ Cities" from iTunes App Store or Google Play to your mobile phone or tablet. The app turns your mobile device into a personal tour guide and its built-in GPS navigation functions guide you from one tour stop to next. The app works offline, so no data plan is needed when traveling abroad.

Maison du IV de Chiffre, at the corner of Dyers and Rue Guillaume Puy, is one of Avignon’s oldest houses. This Gothic house, built in 1493, included a "Figure IV" carved between the three first floor windows, which has been identified in La Farandole, a journal published on October 21, 1913, though its meaning remains a mystery. Despite this, it has been widely used in sculptures, tapestries, stamps, playing cards, pottery, musical instruments, monograms, etc. It is a stylized heart impaled on the top of a dart, adorned with a cross of St. Andrew and a cross of Lorraine. Inside the heart is a segment bounded at each end by a small eye. The ground floor is accessible by a platform spanning the Sorgue. There is a watchtower at each end of the second floor and on the crenelated cornice terminal two gargoyles are used to drain rainwater. Upstairs is a monumental Gothic fireplace.
Image by Jean-Marc ROSIER on Wikimedia under Creative Commons License.
2

2) Church of the Cordeliers

Just down Rue des Teinturiers on the left, the Church of the Cordeliers marks the site of the old Franciscan convent. Introduced into Avignon the year of the death of their founder St. Francis of Assisi in 1226, in 1233 they settled on this site, outside the walls, near the city gate. Today, the truncated summit tower and apsidal chapel remain. The eternal love and muse of Francesco Petrarch, Laura de Noves, was buried here.
Image by Jean-Marc Rosier on Wikimedia under Creative Commons License.
3

Saint-Michel Chapel, on Corps Saints Square, is an old church adjacent to the building which had once served as Eglise du Couvent des Célestins. Built between 1369 and 1378 by the same architect as Eglise Saint-Martial, the chapel bears the name of Archangel Michael, a famous archetype of Christian, Hebrew and Islamic traditions. An interesting fact about Saint-Michel Chapel is that it has a pentagonal form and is unique among other Gothic churches in France.
Image by abrocke on Flickr under Creative Commons License.
4

An old building with a stunning interior, Palais du Roure dates back to 1469. Once the family residence of a Florentine banker, this impressive edifice was built by Pierre Baroncelli. Due to its architecture, the palace is listed as a World Heritage of Humanity site. An extensive collection of artifacts is exhibited here, including unique icons, Provencal furniture of the 18th and 19th centuries, drawings, canvases, figurines, costumes, popular art and other amazing antiques. It serves not only as a cultural center, but also as a library with a great collection of books and the center of Latin and Provencal folklore and customs.
Image by TracyElaine on Flickr under Creative Commons License.
5

Opéra Théâtre, located in the center of Horloge Square is one of Avignon’s top attractions. Built in 1847 by Théodore Charpentier and Léon Feuchères on the site of the former Italian-style theater, Comédie, destroyed by fire in 1846, it offers opera, classical music, dance and theater plays.
Image by steffen heilfort on Wikimedia under Creative Commons License.
6

Avignon, one of Provence’s most important cities, is easily recognizable by its world renowned city walls. During medieval times, it had become a famous center of trade and communication. A turbulent period, over the years invaders had attacked Avignon, which is one of the main reasons the ramparts were built. Work began in 1350 by the order of Pope Clement VI and it was finished in 1475 under the pontificate of Sixtus IV.
Image by Carlton Browne on Flickr under Creative Commons License.
7

The Pont Saint-Bénezet, also known as the Pont d'Avignon, is a famous medieval bridge in the town of Avignon, in southern France. It was built between 1171 and 1185, with an original length of some 900 m (2950 ft), but it suffered frequent collapses during floods and had to be reconstructed several times. Over the centuries, it became increasingly perilous as arches collapsed and were replaced by rickety wooden sections. The bridge was finally put out of use by a catastrophic flood in 1668, which swept away much of the structure. Since then, its surviving arches have successively collapsed or been demolished, and only four of the initial 22 arches remain intact today.

The bridge's construction was inspired by Saint Bénézet, a local shepherd boy who (according to tradition) was commanded by angels to build a bridge across the river. After his death, he was interred on the bridge itself, in a small chapel standing on one of the bridge's surviving piers on the Avignon side.

Image by lorentey on Flickr under Creative Commons License.
Sight description based on wikipedia