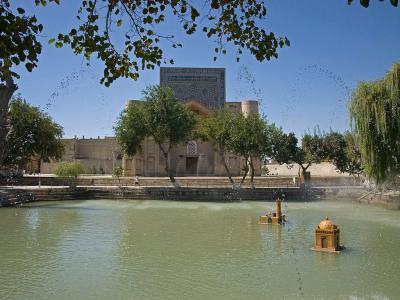 The Lab-i Hauz Ensemble (Persian: لب حوض, meaning by the pond) is a 16th – 17th Century pond complex that is one of only a few remaining sites of its kind in the city. Before the Soviet era there were many such ponds, which were the city's principal source of water. However, they were notorious for spreading disease and were mostly filled in during the 1920s and 1930s. This complex survived because it is the centerpiece of a magnificent architectural ensemble, which has not been significantly changed since its construction. Surrounding the pond on three sides are the Kukeldash Madrasa (1568–1569), the largest in the city, a khanaka (1620), or lodging-house for itinerant Sufis, and another madrasa (1622).
Image by F. Eveleens on Wikimedia under Creative Commons License.
Sight description based on wikipedia

Want to visit this sight? Check out these Self-Guided Walking Tours in Bukhara. Alternatively, you can download the mobile app "GPSmyCity: Walks in 1K+ Cities" from iTunes App Store or Google Play. The app turns your mobile device to a personal tour guide and it works offline, so no data plan is needed when traveling abroad.

Bukhara is a very important place for the Islam faith, having been at the center of the Muslim world during the golden age of the Samanids. Many mosques here date back centuries, with deep traditions and magnificent architecture. Thanks to its many mosques and madrasas, the historic center of Bukhara is a UNESCO World Heritage Site. Take our tour to see the most captivating mosques in the city.