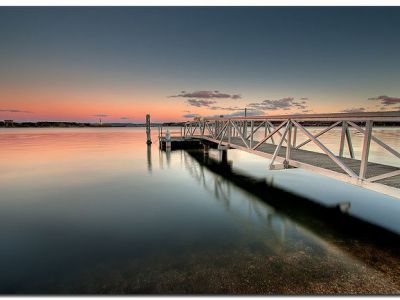 Lake Burley Griffin is an artificial lake in the centre of Canberra, the capital of Australia. It was completed in 1963 after the Molonglo River—which ran between the city centre and Parliamentary Triangle—was dammed. It is named after Walter Burley Griffin, the American architect who won the competition to design the city of Canberra.

Griffin designed the lake with many geometric motifs, so that the axes of his design lined up with natural geographical landmarks in the area. The lake is located in the approximate geographic centre of the city, and is the centrepiece of the capital in accordance with Griffin's original designs. Numerous important institutions, such as the National Gallery, National Museum, National Library, Australian National University and the High Court were built on its shores, and Parliament House is a short distance away. Its surrounds, consisting mainly of parklands, are popular with recreational users, particularly in the warmer months. Though swimming in the lake is uncommon, it is used for a wide variety of other activities, such as rowing, fishing, and sailing. The lake is an ornamental body with a length of 11 kilometres (6.8 mi); at its widest, it measures 1.2 kilometres (0.75 mi). It has an average depth of 4 metres (13 ft) and a maximum depth of about 18 metres (59 ft) near the Scrivener Dam.
Image by Sam Ilić on Flickr under Creative Commons License.
Sight description based on wikipedia

Want to visit this sight? Check out these Self-Guided Walking Tours in Canberra. Alternatively, you can download the mobile app "GPSmyCity: Walks in 1K+ Cities" from iTunes App Store or Google Play. The app turns your mobile device to a personal tour guide and it works offline, so no data plan is needed when traveling abroad.