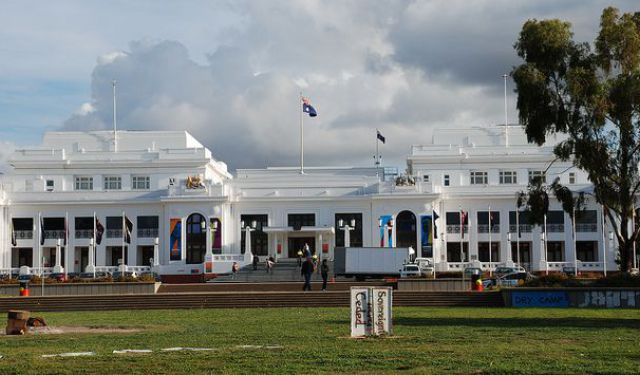 Image by xiquinhosilva on Flickr under Creative Commons License.

Canberra, Australia’s capital, often, and deservedly so, jokingly referred to as the "Bush Capital” for the abundance of forested, farmland and natural reserve areas around, is a beautiful city, home to many recognizable and unique sights. Its center-most piece is Lake Burley Griffin dotted with sailboats and kayaks. Overlooking the lake from the shore is the massive, modern Parliament House, plus a number of museums including the National Gallery, showcasing indigenous art collections. To explore these and other major attractions of Canberra, follow this orientation walk!
How it works: Download the app "GPSmyCity: Walks in 1K+ Cities" from iTunes App Store or Google Play to your mobile phone or tablet. The app turns your mobile device into a personal tour guide and its built-in GPS navigation functions guide you from one tour stop to next. The app works offline, so no data plan is needed when traveling abroad.

Construction of Australia's permanent Parliament House was delayed while its location was debated. Construction of the new building began in 1981. The principal design of the structure is based on the shape of two boomerangs and is topped by an 81-metre flagpole. It contains 4,700 rooms and many areas are open to the public. The main foyer contains a marble staircase and leads to the Great Hall which has a large tapestry on display. The House of Representatives chamber is decorated green while the Senate chamber has a red colour scheme. Between the two chambers is the Members' Hall which has a water feature and is not open to the public. The Ministerial Wing houses the office of the Prime Minister and other Ministers.

Image by Noodle snacks on Wikimedia under Creative Commons License.
Sight description based on wikipedia
2

On 1 May 2008 it was made an Executive Agency of the Department of the Prime Minister and Cabinet. On 9 May 2009, the Executive Agency was renamed the Museum of Australian Democracy at Old Parliament House, reporting to the Special Minister of State. Designed by John Smith Murdoch and a team of assistants, the building was intended to be neither temporary nor permanent—only to be a ‘provisional’ building that would serve as a parliament for fifty years. The design extended from the building to include its gardens, decor and furnishings. The building is in the Simplified or "Stripped" Classical Style, commonly used for Australian government buildings constructed in Canberra during the 1920s and 1930s. It does not include such classical architectural elements as columns, entablatures or pediments, but does have the orderliness and symmetry associated with neoclassical architecture.

Image by Noodle snacks on Wikimedia under Creative Commons License.
Sight description based on wikipedia
3

The King George V Memorial is also in the administrative part of Canberra, near the Old Parliament House. Erected in 1953, it was first located right in front of the Parliament House, but was later moved for convenience.
Image by Bidgee on Wikimedia under Creative Commons License.
4

The Aboriginal Tent Embassy is a controversial semi-permanent assemblage claiming to represent the political rights of Australian Aborigines. It is made of a large group of activists, signs, and tents that reside on the lawn of Old Parliament House in Canberra, the Australian capital. It is not considered an official embassy by the Australian government. The Tent Embassy promotes Australian Aboriginal Sovereignty. Their demands included land rights and mineral rights to Aboriginal lands, legal and political control of certain sacred sites, and compensation for land that they claim was stolen. Their demands have been consistently rebuffed by past and current governments. Currently Elders such as Uncle Neville Williams, from the Aboriginal Tent Embassy are working to protect traditional Wiradjuri land in Western N.S.W at Lake Cowal which is in the process of being mined for gold.
Image by Grahamec on Wikimedia under Creative Commons License.
Sight description based on wikipedia
5

The Albert Hall is a hall in Canberra, used for entertainment. It is on Commonwealth Avenue between Commonwealth Bridge and the Hotel Canberra in the suburb of Yarralumla. The hall was opened on 10 March 1928 by the Prime Minister, Stanley Bruce. The hall was designed by the Federal Capital Commission architect John Kirkpatrick, assisted by Robert Casboulte and Henry Rolland. It is in the Georgian Revival style. A porte-cochere at the front allows for passengers from vehicles to alight undercover. The Albert Hall is used by a range of groups, individuals and commercial operators. It is used on weekends and during the week for private events, dances, balls, performances, cultural activities and commercial sales.
Image by Bidgee on Wikimedia under Creative Commons License.
Sight description based on wikipedia
6

6) National Library of Australia (must see)

The National Library of Australia is the country's largest reference library, responsible under the terms of the National Library Act for "maintaining and developing a national collection of library material, including a comprehensive collection of library material relating to Australia and the Australian people." The Library's collections of Australiana have developed into the nation's single most important resource of materials recording the Australian cultural heritage. The manuscript collection of the National Library contains about 26 million separate items, covering in excess of 10,492 meters of shelf space. The large National Library building is home to various reading rooms and collections. On the ground floor is the Main Reading Room - this is where the bulk of the Library's Internet access terminals are located, and where wireless internet access is available.
Image by Martyman on Wikimedia under Creative Commons License.
Sight description based on wikipedia
7

Questacon – the National Science and Technology Centre, is located on the southern shore of Lake Burley Griffin in Canberra. It is a large centre with more than 200 interactive exhibits relating to science and technology. "The Questacon" opened in 1988 at Ainslie Primary School. Questacon was the first interactive science center in Australia. The center is split up into seven galleries on different floors, accessed by a spiral ramp around the 'drum'. Questacon's shop offers a range of educational science toys, books and teacher's resources. Questacon's cafe is situated in the foyer of the building.
Image by laRuth on Wikimedia under Creative Commons License.
Sight description based on wikipedia
8

The National Portrait Gallery of Australia is a collection of portraits of prominent Australians that are important in their field of endeavor or whose life sets them apart as an individual of long-term public interest. On 4 December 2008, its permanent home opened on King Edward Terrace, Canberra beside the High Court of Australia. The collection was established in May 1998, and until 2008 was housed in Old Parliament House and in a nearby gallery on Commonwealth Place. The Commonwealth Place Gallery focused on contemporary portraits and has a particular emphasis on photography. The permanent building for the gallery lies in the Parliamentary Triangle, and is of concrete and timber construction.

Operation Hours: Monday - Sunday 10 am - 5 pm.
Image by hamiltonstone on Wikimedia under Creative Commons License.
Sight description based on wikipedia
9

9) National Gallery of Australia (must see)

The National Gallery of Australia is the national art gallery of Australia, holding more than 120,000 works of art. It was established in 1967 by the Australian government as a national public art gallery. The National Gallery building is in the late 20th-century Brutalist style. It is characterized by angular masses and raw concrete surfaces and is surrounded by a series of sculpture gardens planted with Australian native plants and trees.

The geometry of the building is based on a triangle, most obviously manifested for visitors in the coffered ceiling grids and tiles of the principal floor. This geometry flows throughout the building, and is reflected in the triangular stair towers, columns and building elements.

The building is principally constructed of reinforced bush hammered concrete, which was also originally the interior wall surface. More recently, the interior walls have been covered with painted wood, to allow for increased flexibility in the display of artworks.

Operation hours: Monday – Sunday: 10 am – 5 pm.
Image by Fir0002 on Wikimedia under Creative Commons License.
Sight description based on wikipedia
10

10) High Court of Australia (must see)

The High Court of Australia is the supreme court in the Australian court hierarchy and the final court of appeal in Australia. It has both original and appellate jurisdiction, has the power of judicial review over laws passed by the Parliament of Australia and the parliaments of the States, and interprets the Constitution of Australia. The High Court was constituted by the Judiciary Act 1903. In the 1950s the then Prime Minister Robert Menzies had established a plan to develop Canberra, and construct more important national buildings. Construction began in April 1975 on the shore of Lake Burley Griffin, in the Parliamentary Triangle. It is an unusual and distinctive structure, built in the brutalist style, and features an immense public atrium with a 24 meter high roof.
Image by Nicholas Brown on Wikimedia under Creative Commons License.
Sight description based on wikipedia
11

Commonwealth Place is located on the southern shore of Lake Burley Griffin. It lies along the ‘water axis’ running along the lake from Black Mountain. Commonwealth Place is the location of the National Portrait Gallery, Reconciliation Place, a restaurant and Speakers Square. Walter Burley Griffin, the architect who designed Canberra, envisaged that the area would be the site of a "water gate" which would have a terrace above it, providing a "forum for the people". Griffin’s vision was for a long time left unrecognised but as of 2005 the area was being developed to reflect the original plan. Speakers Square, at the centre of Commonwealth Place is a concave shaped grassed area with a paved mural in the middle which was gifted to Australia by the Government of Canada to mark the Centenary of Australian Federation.
Image by Andrea Schaffer on Wikimedia under Creative Commons License.
Sight description based on wikipedia