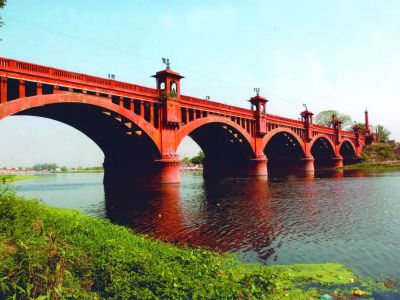 Lal Pul, or Red Bridge of Lucknow city, Uttar Pradesh, is also known as Pakka Pul. The Red Bridge was opened by the British in 1914. It is one of the few bridges that have firmly withstood the floods of the Gomti River. The old stone bridge, the Royal Bridge, was judged too weak to last.

The Royal Bridge, also called the Shahi Bridge, was built by the ruler Asaf-ud-Daula. It was broken up in 1911, and along with that, the foundation of the new bridge was laid. The Red Bridge carries a two-lane road for vehicles and walkways for foot traffic. The span is supported by low ironwork arches anchored to stone piers in the river bed.

Open kiosks hang over the rails at pier points. The bridge road leads directly to the monument Bara Imambara, a spiritual center, and tourist attraction. "Tanu Weds Manu," an Indian Hindi-language romantic comedy, used the bridge as one of its scenic locales.
Image Courtesy of Flickr and Arun P Wahi.