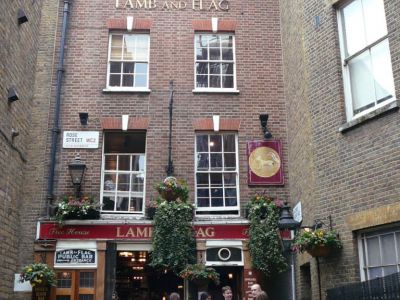 The Lamb and Flag is a Georgian pub with a fascinating history. A plaque commemorates an attack on poet John Dryden, who was assaulted in the alley in 1679 by King Charles's men.

The building became a pub in 1772 and has been named the Lamb and Flag since 1833. The name itself is a traditional British pub name. The Lamb is the Lamb of God, pictured carrying a banner or flag with a cross.

The pub was once nicknamed the "Bucket of Blood" since it was the scene of constant bare-knuckle fights. This pub was a favorite of author Charles Dickens. Today, you should find a quieter and less violent scene.

The interior is just what you'd hope for from a traditional London pub: warm wood, antique brass fixtures, and lots of old photos. You can still enjoy an outstanding meal, great company, and, of course, a pint or two. It's a busy place; in nice weather, you'll often see people drinking their beer in the street outside.