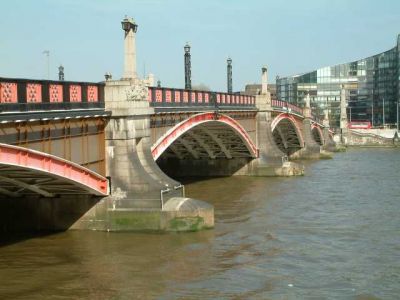 Lambeth Bridge spans the River Thames between Lambeth Palace on the East side of the river and Thames House (headquarters of MI5), Millbank Tower and Tate Britain on the West side.

This fine foot and road bridge was designed by Sir George Humphries, Sir Reginald Blomfield and G. Topham Forrest and built by Dorman Long. It was inaugurated by King George V in 1932.

The bridge is 776 ft long and 60 ft wide; its steel latticework is painted red – the same colour of the benches in the nearby House of Lords at the South end of the Palace of Westminster. At each end of the bridge you will find a pair of obelisks, topped by what might either be pineapples or pinecones - no-one ever agrees about them. From the middle of the bridge, you have a good view of the Houses of Parliament, Big Ben and the London Eye.

The bridge was used in the third Harry Potter film, where the Knight Bus squeezes between two red double-decker London buses. It has also been used in the BBC drama “Waking the Dead” and in the film “Blood Diamond” with Leonardo Di Caprio.

Every year, on 28th August you will find a crowd of ghost hunters on the bridge with recording equipment in hands to capture an image of the ghost of the Duke of Buckingham who was murdered nearby in 1628.
Image by Tagishsimon on Wikimedia under Creative Commons License.
Sight description based on wikipedia