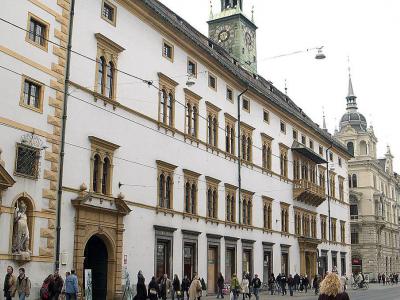 The Landeszeughaus is the largest existing original armoury in the whole world and attracts visitors from all over the world. It holds approximately 32,000 pieces of weaponry, tools, suits of armour for battle and ones for parades. The Landeszeughaus was built from 1642-1645 by a tyrolean architect called Antonio Solar.

Styria desperately needed such a large armoury to host a massive amount of weaponry and armour for the defence of Styria against the invading Ottoman Empire. There was a defensive perimeter, 100 km south of Graz in nowadays Croatia/Hungary to defend Styria against the Turks. The weapons stored in the Landeszeughaus were needed in order to equip the soldiers at this perimeter.

After about 100 years in use, Austrian empress Maria Theresia wanted to close down the armoury, because she centralised the defence of Austria. She wanted to bring all the weapons and armour to Vienna. Nevertheless the Styrian Estates managed to plead for the ongoing existence of the Styrian Armoury and if not for active use at least as a symbol for their struggle against the Turks and also for their achievements in defending not only Styria but Austria alike.

This sight is featured in a self-guided walking tour of Graz, Austria within the mobile app "GPSmyCity: Walks in 1K+ Cities" which can be downloaded from iTunes App Store or Google Play. Please download the app to your mobile phone or tablet for travel directions for visiting this sight. The app turns your mobile device to a personal tour guide and it works offline, so no data plan is needed when traveling abroad.

Create Your Own Walk in Graz

Creating your own self-guided walk in Graz is easy and fun. Choose the city attractions that you want to see and a walk route map will be created just for you. You can even set your hotel as the start point of the walk.

The city of Graz contains many beautiful historic churches and cathedrals. Built over many centuries, they are true gems that should not be missed. Most of the churches in Graz are architecturally and/or historically significant and are well worth visiting. Take this self-guided tour to learn more about the churches of Graz.

The city of Graz hosts many wonderful museums. Perhaps your interest will be caught by one of the exhibitions at the City Museum, or maybe the Hans Gross Criminological Museum is more your style. Whatever your interests, you will find something to engage them on this self-guided tour exploring the fascinating museums of Graz.

Nightlife in Graz is a great experience. The city is a paradise for party goers and those who like to listen to different kinds of music, such as hip-hop, drum & bass, R&B, and house. You can choose from a great variety of nightclubs to suit your musical tastes. The following walking tour will guide you through the best nightlife spots in Graz.

Graz is the home of a great number of beautiful churches, cathedrals, and other religious buildings. The churches of Graz combine many different architectural styles, including Neorenaissance, Gothic, and Baroque, and are of great interest to students and lovers of European architecture. Take this tour to explore the beautiful and historic churches and synagogues of Graz.

The city center of Graz – mainly in and around the Hauptplatz (main square) – is an excellent area that combines modernity and ancient traditional architecture inscribed on the prestigious UNESCO World Heritage List. Take this self-guided walk to explore the city's main landmarks and monuments – from the enchanting ensemble formed by the Dom (Cathedral), the Mausoleum, and the...  view more

Graz, named the European Capital of Culture for 2003, offers a great selection of different art galleries that are definitely worth visiting. Exhibits of modern art and the works of medieval masters can be found just a few footsteps apart. Take this self-guided tour to explore wonderful art galleries of Graz.