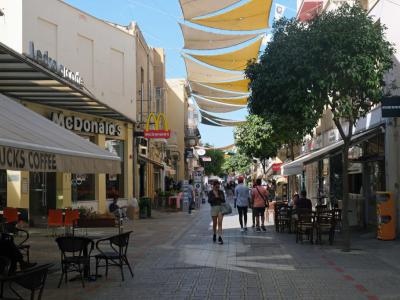 Ledra Street is a major shopping thoroughfare in central Nicosia, which links North and South Nicosia. It is the site of the former Ledra Street barricade where the street ran across the United Nations buffer zone. The barricade symbolized the division of Nicosia between the Greek south and Turkish north which was under the control of the unrecognized, self-declared Turkish Republic of Northern Cyprus. The barricade was removed in April 2008 and Ledra Street became the sixth crossing between the southern and northern parts of Cyprus.

The name of the street refers to the ancient city-kingdom of Ledra, established in 1050 BC, that was located in the centre of the island where the capital city is today. The street leads off Eleftheria square, runs in a South to North direction and is about 1 km long. Most of it lies within the area effectively controlled by the Republic of Cyprus while a short stretch at the northern end between the UN buffer zone and the intersection with Arasta Street and Girne Caddesı falls within the Turkish occupied part of Nicosia. During the EOKA struggle that ran from 1955–1959, the street acquired the informal nickname The Murder Mile in reference to the frequent targeting of the British military by nationalist fighters along its course.
Image by abragad on Flickr under Creative Commons License.
Sight description based on wikipedia