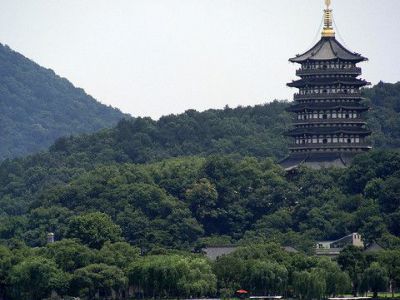 Leifeng Pagoda is a five story tall tower with eight sides, located on Sunset Hill south of the West Lake in Hangzhou. Originally constructed in the year AD 975, it collapsed in 1924 but was rebuilt in 2002, since when it has been a popular tourist attraction. The original pagoda was built during Five Dynasties and Ten Kingdoms period, at the order of King Qian Chu. It was built to celebrate the birth of Qian Chu's son, born to his Huang Fei.

The Leifeng Pagoda was an octagonal, five-story structure built of brick and wood and with a base built out of bricks. During the Ming dynasty, Japanese pirates attacked Hangzhou. Suspecting the pagoda contained weapons, they burned its wooden elements, leaving only the brick skeleton, as can be seen from Ming paintings of the West Lake. Leifeng Pagoda was one of the ten sights of the West Lake because of the Legend of the White Snake. As for whether there was a mausoleum below, this was debated for years until finally radar was used to investigate. On March 11, 2001 the mausoleum was excavated and many treasures were found, most notably a gold and silver coated hair of the Buddha.
Image Courtesy of Flickr and Pedronet.
Sight description based on Wikipedia.

Want to visit this sight? Check out these Self-Guided Walking Tours in Hangzhou. Alternatively, you can download the mobile app "GPSmyCity: Walks in 1K+ Cities" from iTunes App Store or Google Play. The app turns your mobile device to a personal tour guide and it works offline, so no data plan is needed when traveling abroad.