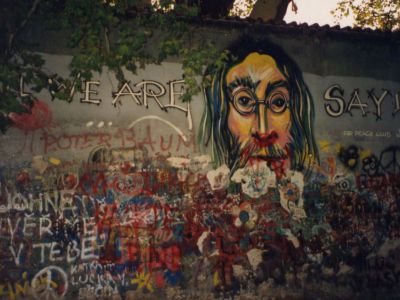 Located in a small, secluded square near the French Embassy is the wall filled with John Lennon-themed graffiti and pieces of lyrics from the Beatles songs. Once a normal wall, it had been initially decorated with messages against the Communist rule, back in the 1960s. The very first Lennon decoration, painted by an unknown artist, appeared in 1980, following the assassination of John Lennon in NYC, and included a single image of the singer-songwriter along with some of his lyrics, symbolizing freedom, western culture, and political struggle.

In 1988, the wall was a source of much irritation for the then communist regime of Gustav Husak. Young Czechs would write grievances on the wall, which, reportedly, had led to clashes between students and security police on the nearby Charles Bridge. Ironically, that student movement was described as "Lennonism" whose members the Czech authorities disparaged as alcoholics, mentally deranged sociopaths, and agents of Western propaganda.

The wall continuously undergoes change and the original portrait of Lennon is long lost under the new layers of paint. On 7 November 2019, the new face of the Lennon Wall – an open-air gallery – was unveiled to the public. Over 30 Czech and foreign professional artists, gathered by Czech designer Pavel Šťastný, contributed to the project. Under the new rules, no spraying on the Wall is allowed; people can leave their messages, if freedom- or love-related, only in the white free zones and in more sensitive materials than sprays, e.g. pencil, marker or chalk. Cameras and police will monitor the wall to ensure the artistic portion is not defaced.

The wall is owned by the Sovereign Military Order of Malta, quartered at Velkopřevorské náměstí (Grand Priory Square), Malá Strana.
Image by Infrogmation on Wikimedia under Creative Commons License.
Sight description based on wikipedia