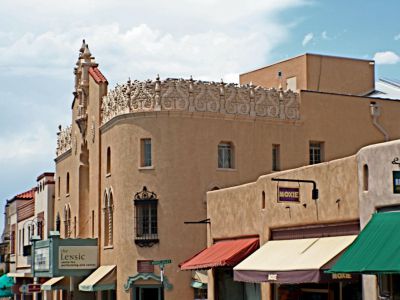 The Lensic Performing Arts Center, located at 211 West San Francisco Street, is an 821 seat theater designed by the Boller Brothers of Kansas City, well-known architects who designed almost one hundred theaters throughout the West and Midwest, including the KiMo Theater in Albuquerque. This Moorish, Spanish Renaissance style theater built by Nathan Salmon and E. John Greer opened in 1931. Its name derives from the initials of Greer's grandchildren. From 1999 to 2001 it was restored, providing Santa Fe with a modern venue for the performing arts.
Image by Asaavedra32 on Wikimedia under Creative Commons License.
Sight description based on wikipedia