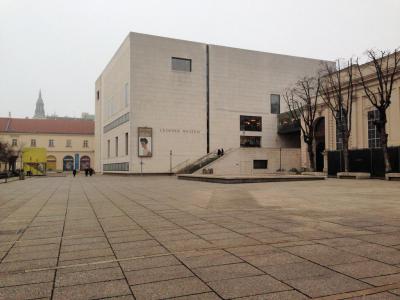 The afternoon is a good time to explore at least one of the museums in the MuseumsQuartier. The light, bright Leopold Museum is a good choice as its architecture is a masterpiece unto itself, with everything from incredibly crafted Wiener Werkstatt furniture to stunning murals inside.

But you're probably interested in Vienna's "turn of the century painting" – and, indeed, here is the largest collection of Egon Schiele and Richard Gerstl paintings in the world. Of course, there are numerous Klimts and Kokoschkas as well, and it's worth coming just to sit and stare at Klimt's "Death and Life" which shows the never-ending cycle of life and death and how mankind cannot worry over the end. The Klimt section also has an authentic reproduction of his studio's antechamber and an exhibition dedicated to the life and work of his long-time companion, lover and muse, Emilie Flöge. All in all, there are more than five thousand exhibits.

In addition to being able to visit this grand exhibit of 19th- and 20th-century Austrian art, you may also want to stop by and visit the gift shop, where you can purchase replications of some of the great pieces exhibited. The building is also home to the fin-de-siècle-style Café Leopold, which is a well known night spot for people to come, have some coffee (or traditional Austrian food), and discuss history, art, and politics.

Tip:
One point of humour – look out for the diagram of Schiele's final studio, complete with on-site skittle alley.