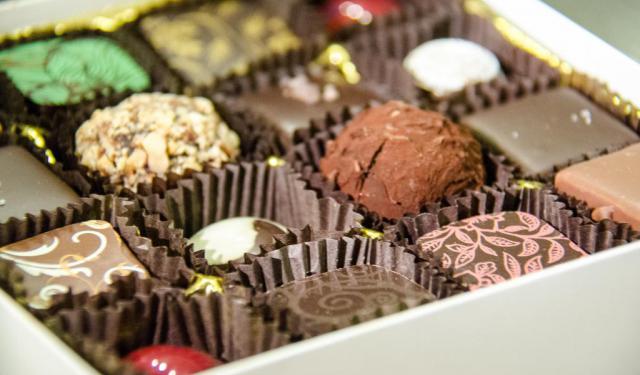 Vienna is famous for its mouth-watering confections. In its specialty shops and boutiques, usually located on the ground floors of historic buildings, you will find the best roasted coffee, high quality chocolates, sweets, wafers, cocoa and, of course, Mozartkugels. Don’t hesitate to visit the wonderful chocolate stores in the Old Town featured in this guide.
Image Courtesy of Flickr and m01229.
How it works: Download the app "GPSmyCity: Walks in 1K+ Cities" from iTunes App Store or Google Play to your mobile phone or tablet. The app turns your mobile device into a personal tour guide and its built-in GPS navigation functions guide you from one tour stop to next. The app works offline, so no data plan is needed when traveling abroad.

Manner is a line of confectionery from the Austrian conglomerate, Josef Manner & Comp AG. The corporation, founded in 1890, produces a wide assortment of confectionery products. These include wafers, long-life confectionery, chocolate-based confectionery, sweets, cocoa and a variety of seasonal products. The company's best-known product are the "Neapolitan wafers", introduced in 1898. They are sold in blocks of ten 47 x 17 x 17 mm hazelnut-cream filled wafers. The hazelnuts were originally imported from the Naples region in Italy, hence the name. The basic recipe has remained unchanged to this day.

The Manner shop is located next to St Stephen Cathedral. There you can find the famous Manner wafers and Mozart balls, both are delicious in taste and great gifts to bring home from Vienna.

Image Courtesy of Flickr and chad_k.
Sight description based on Wikipedia.
2

Altmann & Kühne is a confiserie and chocolaterie in Vienna, Austria, established in 1928. It produces handmade chocolates and bonbons with a special packaging designed by Wiener Werkstätte.

The business, which advertised itself as a supplier to the former Imperial Court, successfully grew during the interwar period. By 1938, Altmann and Kühne was Vienna's fourth chocolatier - a "smaller but upscale producer" trailing after the "big three" of Victor Schmidt, Heller and Küfferle. After the Nazi takeover Emile Altmann and Ernst Kühne, who were Jewish, fled to New York City. But the business survived through the Nazi years and World War II owing to the persistence of one loyal employee, Mrs. Mercek.

Today visitors with a sweet-tooth will be glad to find this shop of tasty souvenirs. Inside the store, the chocolates packages featured modernist designs by the artists of Wiener Werkstätte school.

Image Courtesy of Wikimedia and Gryffindor.
3

Leschanz Schokolade is known locally as the "chocolate king" of Vienna. The originality, high quality and extensive assortments offered here reaffirm its regal name. The chocolates are packaged beautifully and inventively. Once you step inside the shop, a delicious smell of chocolate slaps you in the face, and the shop itself is small but cozy. The chocolates here are a bit pricy compared to some other shops, but this is what you pay for buying a name brand.

According to Viennese legend, Mozart always visited this shop during his strolls through the city.

Demel is a famous pastry shop and chocolaterie in Vienna, established in 1786. The company bears the title of a Purveyor to the Imperial and Royal Court since 1874.

Demel was previously known as Hofzuckerbäckerei pastry shop, founded by Ludwig Dehne, a confectioner from Württemberg. Upon his early death in 1799, the business was continued by his widow for their minor son August Dehne. The latter inherited the company in 1832 and successfully managed the business, however, as his son pursued an academic career, he sold the company to his journeyman, Christoph Demel, in 1857.

Renamed Ch. Demel's Söhne in 1867, Christoph Demel's sons Joseph and Karl continued the business and were granted the title of a purveyor to the Habsburg court by Emperor Franz Joseph I in 1874. In the heyday of the Austro-Hungarian monarchy, notable customers of Demel included Empress Elisabeth (Sisi), Princess Pauline von Metternich, and actress Katharina Schratt. During the Austrian Anschluss to Nazi Germany in 1938–45, the Vienna Gauleiter Baldur von Schirach and his wife Henriette were also regulars here.

If you want to travel back to the imperial times and enjoy an authentic Austrian dessert, this is a great place to go.

Xocolat is one of first Vienna’s shops to specialize in connoisseurs of the cocoa bean and is one of the best. Its golden rule of success lies in using no preservatives and only the best cocoa beans. This picture perfect chocolate shop is located in the Palace Ferstel which is a beautiful place to stop for a coffee or buy some chocolates. The shop offers a wide variety of chocolates, some with traditional flavors and some with quite unusual taste.