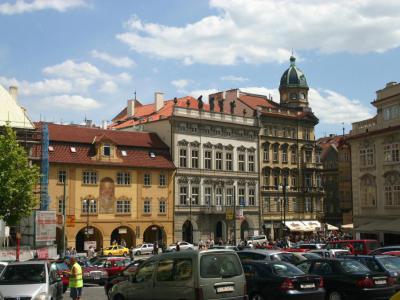 Ever since the 10th century, Prague’s Lesser Town Square has been an important marketplace and epicenter of activity on the left side of the river. Today, it is still abuzz with restaurants, pubs and shops, and is well worth a long visit just to see the multitude of remarkable buildings lining it.

Among them is the 14th century Old Town Hall where non-catholic nobles once wrote “Ceste Konfese” demanding religious tolerance. The centerpiece of the square is the impressive 18th century Baroque St Nicholas Church. Built on the remains of a Gothic chapel, this church boasts some truly wonderful frescoes, including a 1,500-square meter one on the ceiling, and statues.

If you happen to relax over a drink at the renowned 'Malostranska kaverna', make sure to realize that you are sitting in what was once the Gromling Palace, the most important Rococo building in Prague. On the northern edge of the square you will find Smiricky House where the city nobles used to gather in 1618 to plot assassination of Imperial Catholic Governors. The latter were thrown out of window, but miraculously survived, thus sparkling the "30-year" war. The nearby Sternberg Palace today is used by the National Gallery for expositions.

On the façade of the 18th century Kaiserstein Palace you will see the bust of the famous Czech soprano, Emma Destinnova, who lived here in the early 20th century.

Why You Should Visit:
Historic Prague at its core, replete with unique historical palaces and monuments.

Tip:
Stop by to browse the small shops, explore the churches or taste some traditional Czech cuisine.
Image by Michel Curi on Flickr under Creative Commons License.