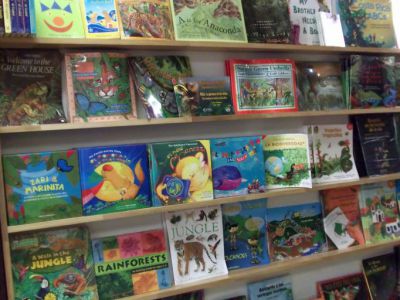 What to buy here: Books - The fact that Costa Rica is home to 4 % of the world’s biodiversity makes it a stunning place to photograph. It’s no surprise that stacks of coffee table books grace the shelves of bookstores. Magical Trees by Juan José Sergio and Giancarlo Pucci (2nd Edition), a soft-covered book about the trees of Costa Rica with text in English and Spanish ($38). (One of the writers is Jaime Gambo from Costa Rica’s famous band Malpais.) Among the large selection of creative bilingual children’s books, there is a story and coloring book called Magical Trees ($7) that talks about five of Costa Rica’s native trees. You can also find coffee table books highlighting the guaria morada (orchid), which is Costa Rica’s national flower, and birds. Costa Rica is home to 860 recorded bird species. (That’s more than the recorded number in the U.S.A. and Canada combined!) Along the city’s bustling Avenida Central are Libreria Lehmann, Universal and Libreria Internacional, all of which sell a great variety of books about Costa Rica.
Image by Beverly Gallagher under Creative Commons License.