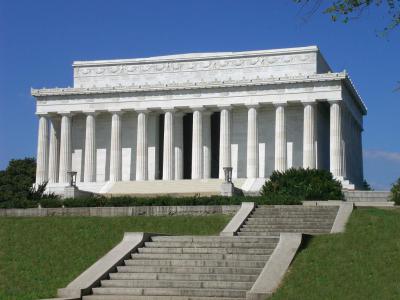 The Lincoln Memorial is one of the most famous monuments and historical places in the United States. It is a nationally recognized location that was built in honor of Abraham Lincoln, who was the 16th President of the United States, during the bloody years of the Civil War. The monument is a fine example of a classic Greek Doric temple. Even the sculpture of the President is done in Olympic Godlike fashion. Two well-known speeches of the former President are also engraved there: the Gettysburg Address and Lincoln’s Second Inaugural Address.

The Lincoln Monument Association was formed two years after the death of the President. Planning for the memorial, though, stretched out until 1901. The Lincoln Memorial Bill was signed by President Taft in 1911. Interestingly, the entire monument was built for just $2 million. Today, the site is still famous as the location for many historic speeches, like the “I have a dream” speech by the Rev. Martin Luther King. It has also been the site for many famous protests. The Monument is cared for by the National Park Service and is listed on the National Register of Historic Places. The monument is open 24 hours a day.

Why You Should Visit:
The most visited memorial in the National Mall for a reason; it is beautiful and offers a fantastic view of the reflecting pool and the Washington Monument.

Tip:
Go first thing in the morning (probably before 9am) or later in the evening (when the lights are on) to avoid the crowds.
Right on the steps, look down on the floor for the "I have a dream" block. It's where MLK, Jr. stood when he gave his most famous speech.
Pack your food and water (in the summer) because the food at the refreshment stands is not very good and somewhat overpriced.
Image Courtesy of Wikimedia and Paul Frederickson.
Sight description based on Wikipedia.