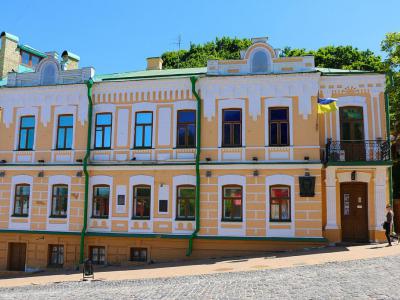 The Mikhail Bulgakov Museum in Kiev is a bit of a blend between fiction and reality. Dedicated to Mikhail Bulgakov’s life and literary work, the museum was first opened in 1989, as a department of the History Museum, and then transformed into a separate entity, in which capacity it was unveiled to the public on May 15th 1991, on the 100th anniversary of the writer’s birth.

The museum is located at the famous Andrew’s Descent, no. 13, the house in which Bulgakov was born and spent much of his life. The museum features two sections: the one representing the house itself, just as it was before the restoration, containing some of the original items; and the other one, hosting the collection of Bulgakov's exhibits. In fact, the museum depicts the life of two families at the same time - the real Bulgakovs, who once lived in the house, and the Turbins, the fictitious characters of Bulgakov’s “The White Guard” novel, also set in the same house. The imaginary and real worlds overlap here, complementing each other, just like a perfect dream. There are in total some 2,500 exhibits in the collection, including 500 belonging to the Bulgakov family. Many of them have been donated by the writer's relatives and the people who knew him personally.