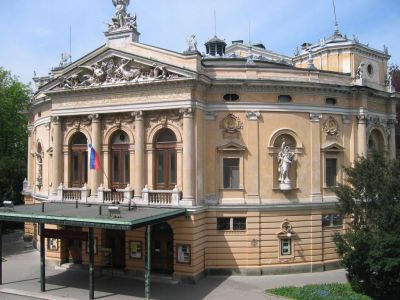 Located between the Slovenian Parliament, the National Museum and the National Gallery is the Ljubljana Opera House - previously the home of the Provincial Theater, built between 1890 and 1892 in Neo-Renaissance style by Czech architects Jan V. Hrasky and Anton Hruby. The facade of the Opera House has Ionic columns, supporting a tympanum above the entrance, and two niches at the sides, adorned with Alojzij Gangl's allegorical statues of Tragedy and Comedy.

Prior to the construction of the German Theater (the present Drama Theater) in 1911, it held productions in both Slovenian and German; afterwards, only in Slovenian.
Image Courtesy of Wikimedia and Ziga.
Sight description based on Wikipedia.