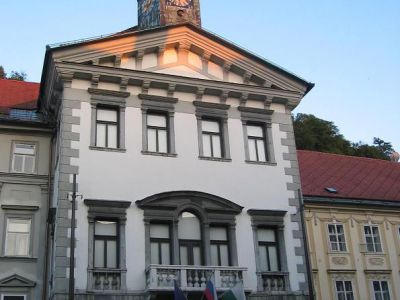 Ljubljana Town Hall was originally built in the 15th century. An annex was added in the 1700s, giving the building its current appearance. The facade has a Venetian influence, as shown in the gable front, the three-part staircase, and the loggia. Visitors can climb the impressive steps and admire the Venetian-style arched balcony. The town hall also features a pediment with a clock tower.

A Gothic plaque with the original medieval coat of arms from the original town hall building is displayed in the vestibule. A 17th-century statue of Hercules with a lion is also on display in the town hall. This statue was part of the 17th century Hercules Fountain from Old Square. The Hercules statue replaced the monument to Yugoslavia's first king, Peter I. The statue of Peter I was removed by Italian troops during World War II.

The courtyard features arches with intricate designs. In addition, a variety of statues are on display in the courtyard's niches.

Visitors can tour the wedding hall, the banquet hall, and the Grand Council Chamber. Ljubljana's famous mayor from 1896 and 1910, Ivan Hribar, is commemorated in a monument next to the staircase.

There are four exhibition spaces in the town hall, including the Glass Atrium, the Central Atrium, the Right Atrium, and the Historical Atrium. Exhibitions are organized by the city and include local and international art exhibitions.
Image Courtesy of Wikimedia and Ziga.