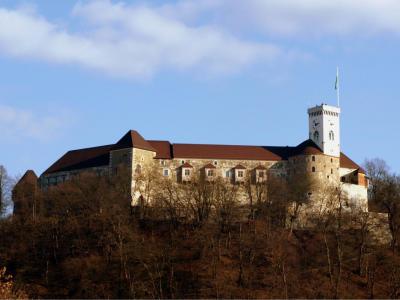 Ljubljana Castle is an imposing medieval structure on Castle Hill. Ljubljana Castle overlooks the town and is Ljubljana's most prominent landmark. The castle was originally constructed in the 11th and 12th centuries and has undergone many revisions, reconstructions, and additions throughout the centuries. The castle's present appearance developed in the 15th century. Most of the current structures were added in the 16th and 17th centuries.

The area around the castle has been settled since 1200 BC. It is thought that the Roman army built fortifications here. During the 13th century, the castle went through several owners. First, the rulers of Carniola owned the castle, then King Ottokar II of Bohemia captured the castle, and finally Rudolph of Habsburg won the castle in battle.

During the 15th century, a drawbridge and St. George's Chapel were added to the castle. The French Army occupied the castle in 1797 and 1809. The castle functioned as a prison, while Ljubljana was part of the Austrian Empire during the 1800s. It was again used as a prison during World War II. The viewing tower was built in 1848. A guard would fire cannons to warn the city of fire or to welcome important visitors.

Because fortification was no longer necessary and maintenance costs were high, the castle deteriorated in the 19th century. The castle was redesigned as a prison and stronghold. Several prominent people were jailed here, including Hungarian Prime Minister Lahos Batthyany, revolutionary Silvio Pellico, and author Ivan Cankar.

The Municipality of Ljubljana purchased the castle in 1905 and settled economically disadvantaged families in it. The families moved out in 1963 when the town began renovations. The castle is used for weddings and cultural events.

The castle consists of many important buildings. The current bridge replaced the original wooden bridge in the 17th century. Archers' Tower was built in the 15th century. The interiors were decorated in the 1900s with painted motifs.

The panoramic terrace is located on the medieval defense wall. The castle's prison was extremely basic. Prisoners were lowered into an open-air pit and exposed to the elements. Several towers and the medieval Castle Chapel of St. George are additional important castle structures.
Image Courtesy of Wikimedia and Rampensau.