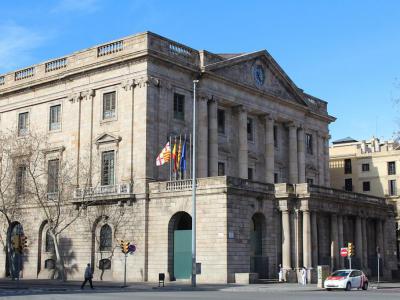 Originally built in the 14th century, this edifice has been used for a number of purposes, all of which have been linked with trade and seafaring life. Former seat of institutions such as the Consulate of the Sea, the Royal Assembly of Commerce and the Barcelona Stock Exchange, it is now the corporate headquarters of the Barcelona Chamber of Commerce.

Much of the original Gothic interior has been preserved, including the trading room, and the magnificent two-tier Consuls' Hall.

***PICASSO'S BARCELONA***
Pablo Picasso entered the School of Fine Arts (Escola de Llotja) in 1895 aged 13. At the time, the school – where his father, Don José taught – occupied the top floor of the building. In fact, though he was younger than his classmates, Don José managed to get Pablo enrolled in advanced classes after the teen submitted a pair of charcoal drawings of a live model to a panel of art teachers. Whereas most students usually worked for four weeks on the two important sketches, Pablo completed them within a week (the drawings are still kept in the school's archival collection.)
Image Courtesy of Wikimedia and Chabe01.