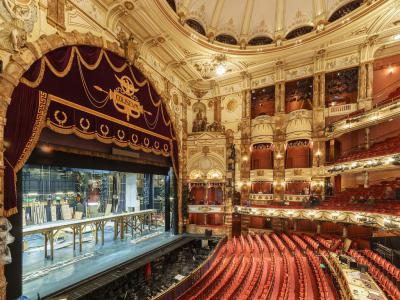 Designed by Frank Matchum for Oswald Stoll, the famous impresario, the London Coliseum was intended to be, and still is the best and largest “People’s Palace” for entertainment. You will find it on St Martin’s Lane, and whether you decide to take in a show, or go on the guided tour, you shouldn’t miss visiting this magnificent opera house.

The vast auditorium with seats for over 2300 people was built on four floors: Stalls, Dress Circle, Grand Tier and Balcony. There is no Pit, which was unheard of in that time. In late Victorian times, the Pit was an area of Stalls set away from the main Stalls, where the lower classes were crowded together. Oswald Stoll wanted none of that – his theatre was intended to be a family theatre.

It opened in 1904 and quickly became the most popular variety theatre and music hall in the capital, partly because the seats weren’t very expensive. During World War II it was used as a canteen for the Air Raid Patrol and Winston Churchill gave a speech from the stage. After 1945 it was mainly used for American musicals. In 1961 it became a Cinerama Theatre.

In 1968 it reverted to its original use and is now the home of the English National Opera Company. It has the widest proscenium arch in London, being 55ft wide and 34ft high. There is a lift for the disabled and a lovely roof garden.

Here’s a small anecdote: At the beginning of the 20th century, the Theatre Managers Association didn’t allow dramas to be performed in music halls. Oswald Stoll fought against this and eventually the TMA relaxed its rules – a little. Dramas could be staged, but should be no longer than 30 minutes and have no more than 6 speaking characters. The first drama for music hall was written by W.S. Gilbert, the dramatist, best known for his Gilbert and Sullivan comic operas. It was a one-act play called “The Hooligan” and was performed at the Coliseum for the first time in 1911.
Image by Andrea Vail on Flickr under Creative Commons License.
Sight description based on wikipedia

Thirty-three bridges span the Thames river in London. Each one has its own history and is worth seeing. This self-guided walk takes you to see ten historical bridges in central London.