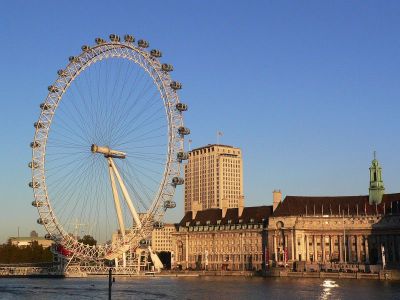 The Merlin Entertainments London Eye (commonly the London Eye, or Millennium Wheel) is an extremely large passenger-carrying Ferris wheel situated on the banks of the River Thames in Central London.

It is the largest Ferris wheel in Europe and has become the most popular paid tourist attraction in the United Kingdom, visited by over three million people in one year. At the time it was erected, in 1999, it was the tallest Ferris wheel in the world, until it was surpassed by the Star of Nanchang in May 2006, and then the Singapore Flyer on 11 February 2008. However, it is still described by its operators as "the world's tallest cantilevered observation wheel".

The London Eye is located at the western end of Jubilee Gardens in the London Borough of Lambeth, between Westminster Bridge and Hungerford Bridge. The site is adjacent to that of the former Dome of Discovery.

Why You Should Visit:
A nice way to gain perspective of the city, especially if it's your first time in London. You can enjoy spectacular views with Shard and London bridge on one side and Big Ben and the Palace of Westminster on the other side. The ride lasts roughly 30 minutes, and you can both stand or be seated in the pods.

Tip:
Getting your ticket(s) in advance online is a good idea.