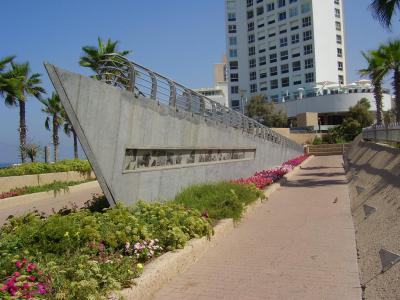 Each street and square in Tel Aviv has a name with a great deal of historical background. London Square is no exception. Inaugurated in 1942 by Yehuda Rokach, the then mayor of Tel Aviv, it carries the name of London in honor of the British capital whose residents stood bravely against the Nazis bombing their city during the Blitz.

Remarkably, during that same period, boats full of Jewish refugees fleeing the war in Europe to the promised land were tracked by the British authorities in a bid to stop “Jewish immigration to Palestine”. Commemorating those days and the heroic Jews, who risked their lives while anxious to slip through the British naval blockade in order to settle down in Israel and build the Zionist dream, is a local memorial presented in the shape of a boat.
Image by ד"ר אבישי טייכר on Wikimedia under Creative Commons License.