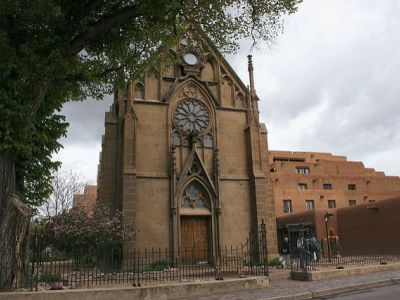 Now a museum and wedding chapel, this former Roman Catholic church was commissioned in 1873. It was built by the Sisters of Loretto for their girls' school. French architects Antoine and Projectus Mouly based the design on the Gothic Revival-style Sainte-Chapelle in Paris. The building has the spires, buttresses, and stained glass that you'd expect from such a structure.

The centerpiece of the church, however, is the spiral staircase. Known as the Miraculous Stairs, they climb two full turns to the choir loft above. The stairs have no support structure or central pole, and they are held together only with glue and wood pegs. The stairs never fail to impress even modern carpenters who have access to modern tools and methods that the stair's creator couldn't even dream of.

According to the Sisters of Loretto, the choir loft and stairs were the last additions needed for the church, but the primary architect's death created problems. No one could find a solution for creating the loft in such a limited space, and so the nuns prayed to St. Joseph, the patron saint of carpenters, for nine days straight. On the ninth day, a mysterious stranger appeared and agreed to build the staircase. The man worked in solitude and disappeared after the staircase was completed. The sisters were certain it was a miracle.

The spiral staircase is sure to impress and inspire all visitors with its workmanship and history. You also won't want to miss the gorgeous adornments to the former church, including the stained glass rose window and many statues. The chapel was the first Gothic building built west of the Mississippi.

Take the time to listen to the chapel's audiotape history, which will fill you in on the intriguing history of the chapel. The tape plays on a loop throughout the chapel.