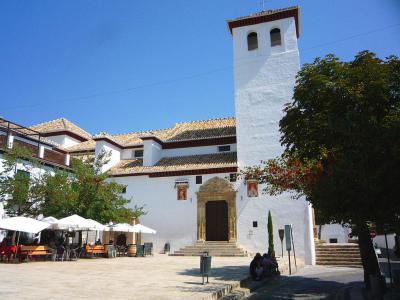 Low San Miguel is low because it is lower than the other San Miguel, High San Miguel. Low San Miguel church has a humble simple appearance, but the church and the plaza tell the story of the city.

The fountain alongside the church is of red brick, indicating the church may have been a mosque in the time of the Muslim Almohads. Two marble columns from the Roman imperial age suggest an even earlier time. A statue of Christ on the cross is bound with iron clamps, a veteran of the Spanish civil war.

The church was built in the Mudejar style but it has Renaissance accents. The entrance is flanked by two corinthian columns and pilasters bearing shields. There is an image of San Miguel above the doors, made in 1558 by Toribio de Liébana. On the sides of San Miguel's niche are two oculi with angels. On the western portal is St. Peter, similarly arranged.

The church has one nave and side chapels, a Main Chapel and a choir. In the 16th century Tomas de Morales installed an altarpiece in two sections. In 1753 Blas Moreno replaced Morales' altar pieces with an altar with sculptures by Turcato Ruiz del Peral.

At last, visit the tower. The tower is square, with five floors accessible by stairs. On each floor there are chairs for those not used to serious climbing. From the top floor of the tower there are spectacular views of Albaicin, the convent of Santa Isabel, and the city of Granada.
Image by Martin Haisch on Wikimedia under Creative Commons License.