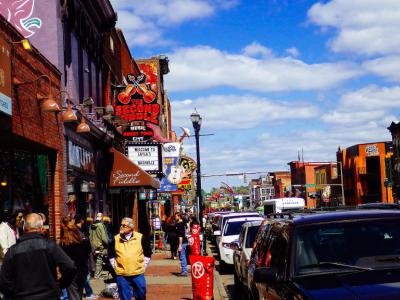 It may be known locally as honky-tonk, and it may be used as a noun (a bar that plays Western swing, where people dance), a verb (dancing to Western swing), or an adjective (a descriptor of the type of music), but one thing is for sure: in Nashville the honky-tonk music scene is as it ever was, alive and booming, allowing you to watch some great bands and singers.

The main strip of honky-tonks is found along Lower Broadway in the heart of downtown, which means you can easily hop around from one to another. They play a specific strain of country and western swing music, with a live band. Small or large, these venues all have some empty space to cut the rug because dancing is an essential part of Nashville honky-tonk.

The best places to go honky-tonking include the multi-level Tootsie's Orchid Lounge (with a nice rooftop bar on top), the cozy and not too crowded Layla's or Legends Corner, and Robert's Western World, whose house band is amazing. Most of these establishments are open to all ages during the day, but convert to 21 and up after 6pm. They typically don't have a cover charge, though when the cowboy hat is passed for the band, don't forget to drop a few dollars in.

Tip:
Also on Lower Broadway are the Bridgestone Arena and the Nashville Convention Center, while the Ryman Auditorium and the Country Music Hall of Fame and Museum are both within one block away.
Image by spablab on Flickr under Creative Commons License.