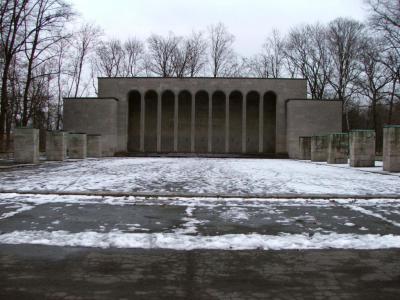 Since 1906 a park named Luitpoldhain, after Luitpold, Prince Regent of Bavaria had been located here. In 1933 Hitler replaced it with a deployment area, the so called Luitpoldarena, with an area of 84,000 square meters. During the Weimar Republic (1919–1933), Ehrenhalle (Hall of Honor) was built on the park. During Nazi party rallies, deployments of the SA and the SS, with up to 150,000 people, took place here. After 1945, Nuremberg redesigned the area into a park again. Today, a memorial honors the fallen German soldiers of the 1st and 2nd World Wars.
Image by BArchBot on Wikimedia under Creative Commons License.
Sight description based on wikipedia