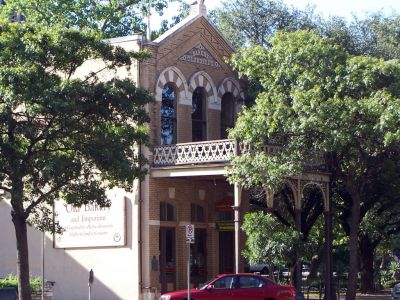 The Lundberg Bakery, also known as the Old Bakery and Emporium, is a historic sight currently serving as a gift shop in downtown Austin, Texas. The building was completed in 1876. At the time the bakery began operations, bread was not sold wrapped or packaged. People would wait in line with cloth lined baskets to place the bread in after buying it.

The building served as a bakery until its owner, Swedish immigrant Charles Lundberg, died in 1895. It changed hands frequently until being bought and refurbished by the Austin Heritage Society in 1962. It was threatened with demolition in 1970, when a new building was planned for the Texas Department of Transportation, but was saved when excavations next door uncovered the foundations of the previous state capitol building. Following the discovery, the foundations were converted to a historical plaza, and the bakery was spared.

The building is constructed of limestone with a brick facade, and features a large cast-iron eagle at the peak of the gabled roof overlooking Congress Avenue. It was added to the National Register of Historic Places on December 17, 1969.
Image by Larry D. Moore on Wikimedia under Creative Commons License.
Sight description based on wikipedia