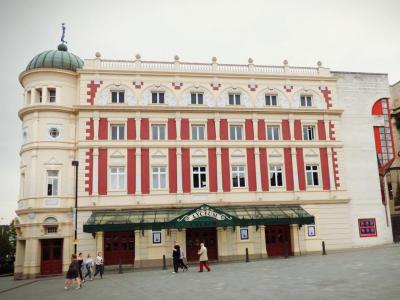 The Lyceum is a 1068-seat theatre in the City of Sheffield, England. Built in 1897 following a traditional proscenium arch design, the Lyceum is the only surviving theatre outside of London designed by the famous theatre architect W.G.R. Sprague and the last example of an Edwardian auditorium in Sheffield. The Lyceum prides itself as being the home of Sheffield's Pantomime. For many years, the months between Christmas Eve and Easter were Panto-time with visiting producers bringing famous actors and variety turns to entertain local families twice a day. In the forties, the Lyceum began to produce its own pantomime and were soon bringing in stars of radio such as Morecambe and Wise, Harry Secombe and Frankie Howerd. In 2007, Sheffield Theatres replaced the touring companies by starting co-production with Evolution Pantomines. Their first show Cinderella was followed by Aladdin in 2008 and Snow White and the Seven Dwarfs in 2009.
Image by Lighthelper :) on Flickr under Creative Commons License.
Sight description based on wikipedia