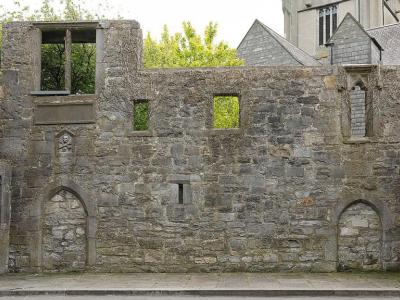 Adjoining the graveyard of the Collegiate Church of San Nicholas of Myra, surmounting a relief of skull and bones and a memorial plaque explaining the event, is the window used to hang a man in 1493. James Lynch FitzStephen was mayor at the time. He belonged to the "tribe" Lynch, which had provided Galway with eighty mayors.

Thirteen other families or "tribesmen" formed the ruling class in Galway. James had a son. His son's name was Walter. Walter had a temper. Apparently it was a jealous temper. One day in a jealous rage, he killed a young Spanish sailor over a woman. Justice needed to be done. James sentenced his son, Walter, to death.

James tried to remove Walter to the scaffold, but a mob surrounded his house, Lynch's Castle, and prevented him from doing so. No problem, James took Walter to a high window and hanged Walter himself (thanks, Dad). Ironically, the "lynch" mob was trying to prevent a lynching. Sadly this did not become a custom, lynchings have proliferated..

After this extraordinary event the mayor retired. But he did not fade into oblivion. He got his memorial.
Image Courtesy of Wikimedia and Bob Linsdell.