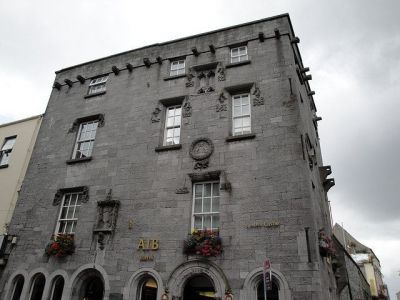 Lynch was one of the powerful merchant "tribes" who ruled in Galway from 1450 until 1690. The Lynch family lived in the fortified townhouse that stands today at the corner of Shop and Abbeygate Streets. Until 1690, the Lynches provided 80 mayors of the city.

In 1690 William of Orange and his Protestant Army defeated Catholic James II in the Battle of the Boyne. All Catholic lands, including the Lynch's Castle, were confiscated.

But the dark story of Lynch's castle starts well before the Battle of the Boyne. One of the mayors, James Lynch, had a son, Walter. In 1493 young Walter murdered a Spanish sailor for winking at a woman. Some say Irish girls had always fancied Spanish sailors. Perhaps Walter overreacted a bit.

It fell to James, as Mayor, to punish Walter. To keep things simple, he sentenced Walter to death. James was prevented from taking Walter from the Castle to a place of execution by a mob. Walter was a popular boy. So James took him upstairs roped him up and launched him from a window. This was the first "lynch" mob.

The building was extended in 1808 and in 1930 it became a branch of Allied Irish Banks. It is four story high with embellished windows, gargoyles, and ornamental cornices. The Lynch coat of arms is on the facade, together with that of Henry VII and the Kildare Fitzgeralds.

The ground floor may be visited during business hours.
Image Courtesy of Flickr and LiamDC.