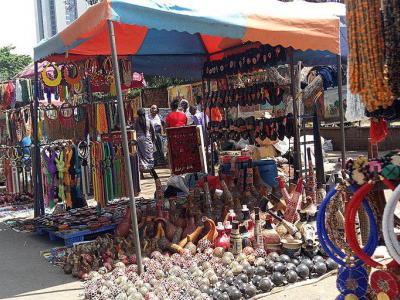 A wonderful place that impresses mainly with its brightness and colors. Every Tuesday art works of the Maasai tribe are sold here. Charming bead work, colored Maasai wraps, jewelry, African statuettes made of black wood and many other fascinating things you can buy as a gift or souvenir. But you should remember that Maasai goods are usually overpriced and that you should bargain with the sellers.

What to buy here: Spears.

A Maasai spear has a major role in the social and religious standing of a warrior. They are handcrafted using wood and adorned with colorful charms, leather thongs and carved wood accessories. The traditional Maasai spear is made up of three sections: the grip, the spear head and the metal butt of the head. All three pieces are held together by hardened wax. If you’re checking yours into your luggage, you can get a spear that comes without the added wax, so it can broken down into 2-3 pieces for easy carrying. Depending on the material, quality and whether the spear was made for a warrior (which makes it more expensive) or directly to sell to tourists, spears can go for anywhere between U$30 and over U$500. Traditional spears made by the Maasai people are sold at a number of markets, including the large Maasai Market on Slip Road. Smaller Maasai markets are mobile, which means they can be found in different areas of the city depending on the day you go shopping. On Saturdays and Sundays, there’s a market on the High Court Parking at the City Square Down Town. On Sundays there’s also a market at the car park outside the Yaya Shopping Centre. The upper car park at the Village Market in Gigiri hosts a market on Fridays.
Image by khym54 on Flickr under Creative Commons License.