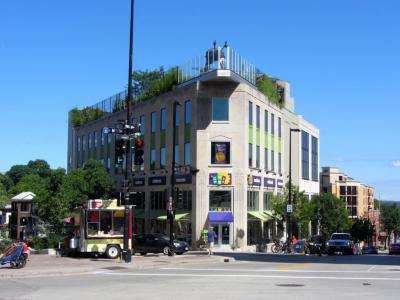 Madison Children’s Museum was founded in 1980 by a group of early childhood specialists. The founding board of directors and volunteers built traveling exhibits that were displayed at neighborhood centers, parks and playgrounds. They also operated a pilot museum in the basement of the Wisconsin Academy of Sciences, Arts and Letters. The success of the pilot program prompted the museum to relocate to a warehouse at Bedford and West Washington. The new location was a success, and the museum was often filled to capacity.

After a successful capital campaign, Madison Children’s Museum opened its doors in another rented location on 100 State Street in 1991. The museum flourished at this site and once again outgrew its space. In 2005, MCM acquired a $5 million, five-story office building through the generosity of W. Jerome Frautschi. The museum undertook a $10 million capital campaign to renovate the building, create an accessible green roof, and install new exhibits. The new facility opened on August 14, 2010, and greatly expands the museum’s capacity to serve larger audiences, older children, and school groups in a strong interdisciplinary program that emphasizes the arts, sciences, history, culture, health, and civic engagement.

The museum is open daily from 9:30 a.m.- 5 p.m.
Image by tvol on Flickr under Creative Commons License.
Sight description based on wikipedia