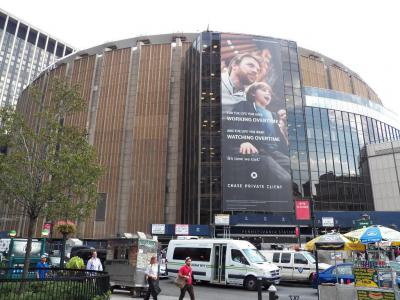 One of the most famous venues in the world, Madison Square Garden hosts each year over 300 sporting events, musical performances and other gatherings. The arena was built in 1968 on the site of the demolished Pennsylvania Railway Station, and was the first structure of this sort to be placed atop a railway station. The venue incorporates a large indoor theater, expo center for trade and car shows, two cafes and a 9,500 feet terrace.

Madison Square Garden is the longest active sporting facility in New York City, hosting basketball, ice hockey, and boxing matches on a regular basis. On two occasions, in 1972 and 1994, the Stanley Cup Finals and NBA Finals were held here simultaneously. Some of boxing’s biggest fights were held at Madison Square Garden as well, including the first Muhammad Ali – Joe Frazier bout.

Based on the annual ticket sales, MSG is the third biggest music venue in the world which, throughout its history, has seen practically all the top performers in the world. In 1972 Elvis Presley made history becoming the first entertainer to sell out four consecutive shows at MSG. The March 3 1988 concert by Michael Jackson is considered to be the greatest concert ever held here. The Garden is also the only venue at which each of the four former members of The Beatles played solo concerts after the breakup, with John Lennon’s final concert at MSG taking place just before his murder in 1980. Sir Elton John has played MSG 62 times – more than any other artist, and Justin Bieber claims the record for selling out Madison Square Garden the fastest of any artist – two shows for his 2012 Believe tour sold out in just 30 seconds.

Why You Should Visit:
Great arena with great amenities; a magnet for sports fans and live show aficionados alike.
It boasts an amazing bowl-like arena that provides great viewing and good acoustics for whatever event you choose to attend.

Tip:
Go to the Madison Square website and check what events are taking place during your visit!
The facility tour is very interesting, but make sure there are no events scheduled for the day you want to take it, because it may not be offered.
Image Courtesy of Flickr and Rich Mitchell.